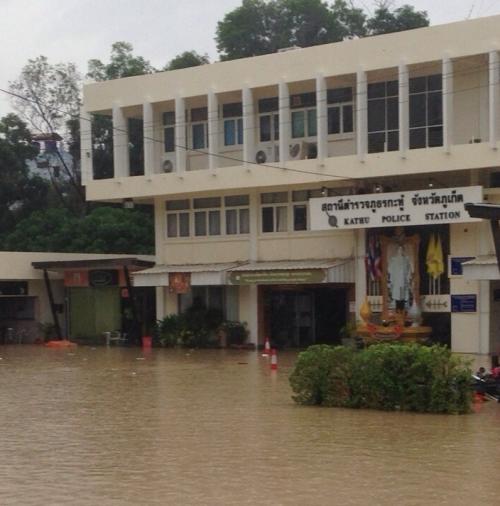 PHUKET: The torrential rains across Phuket this morning caused more flooding in Patong, with access routes to the Patong Hospital and Patong Police Station under water.

The downpours this morning saw 56.2mm of rainfall recorded within just three hours in Phuket Town, from 7am to 10am, while the weather monitoring station at Phuket Airport recorded 14.4mm from 4am to 7am and a further 9.8mm from 10am to 1pm.

Patong Hospital Director Sirichai Silpa-archa confirmed that the hospital’s facilities remained unaffected, though heavy vehicles were brought in to make sure any inbound patients could be delivered to the emergency ward.

Patong Police Superintendent Chiraphat Pochanaphan told the Phuket Gazette that his officers and those from Patong Municipality were manning the pumps to drain floodwater blocking access to the front of the police station.

“If the rain stops, the water will recede and everything will return to normal. In the meantime, police are performing their regular duties as usual,” he said.

Kathu District Chief Veera Kerdsirimongkol explained that keeping the storm drains throughout the town clear of debris was critical in helping the floodwater to recede.

“We need to accelerate the drainage of water into the sea as quickly as possible. We have called in all relevant agencies to make this possible. If the rain stops, the floodwater will recede quickly,” he assured.

The Department of Disaster Prevention and Mitigation Phuket office (DDPM-Phuket) has issued a flood warning for all areas across the island.

“The DDPM-Phuket is monitoring the situation closely and we have found several areas that are experiencing flooding due to the water being unable drain,” said the warning.

Local government agencies were told to prepare response teams, pumps and other equipment to provide emergency assistance in case of flash floods and landslides.

Meanwhile. the weather forecast calls for heavy rain until Friday, and Worapat Tiewthanom, Director-General of the Thai Meteorological Department issued another weather warning for Phuket and the Andaman coast at 11am this morning.

“Torrential rain and heavy to very heavy falls in many places are expected over the country, and strong wind waves 2 to 3 meters high are likely in the Andaman Sea and the upper Gulf,” Mr Worapat warned.

“People should beware of heavy rain. All ships should proceed with caution, and small boats keep ashore from June 11 to 14,” he added.