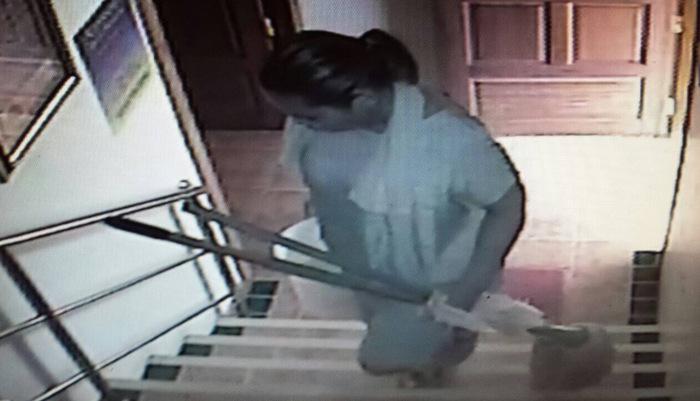 PHUKET: Patong Police are calling for any information that might lead to the arrest of a woman who applies for work as a maid, then literally cleans the place out, absconding with valuables.

“We’ve received many complaints about this woman,” said Lt Col Sutthichai Thianpho of the Patong Police.

“Today we received another complaint, this time from Karlsson’s Hotel,” he told the Phuket Gazette.

Management at the hotel today provided CCTV footage of the woman leaving the hotel after allegedly stealing cash and a cellphone from a guest’s room.

“Each time, the suspect applies for a job as a maid. She says she doesn’t mind how much the pay is, just that she needs to start work as soon as possible,” explained Col Sutthuchai.

“But she never presents her ID card. She says that she will bring it later.

“Then as soon as she has a chance to work, she grabs whatever she can and leaves.”

Col Sutthichai described the woman as heavyset with dark skin, probably in her 40s, about 155cm tall with shoulder-length hair. She speaks in Southern Thai.

“Please keep an eye out for her – and beware of her,” he warned.

Anyone with information that may lead to the woman’s arrest is urged to call Patong Police Station at 076-342720.