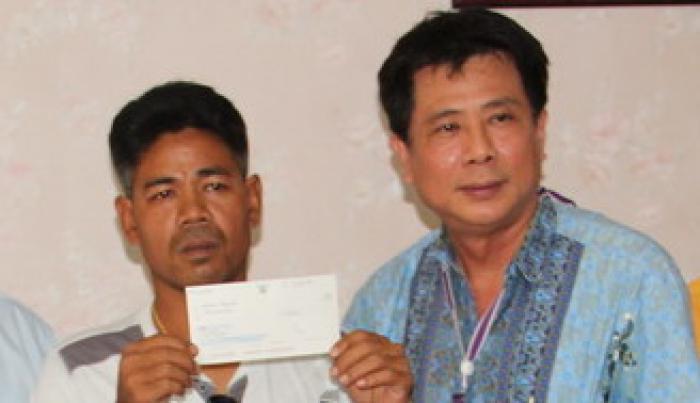 PHUKET: The man who lost his wife and son to complications of childbirth has received 100,000 baht in compensation from Vachira Phuket Hospital.

Hospital Director Jessada Chungpaibulpatana expressed sorrow on behalf of the hospital, and presented the check to grieving father Numporn Intawong.

“We would like to express our deepest condolences for this tragic loss of lives. We hope that this money will help to cover the funeral costs, and we have suggested other avenues through which Mr Numporn might be able to collect funds from the government,” said Dr Jessada.

The results of the autopsy have yet to return from Bangkok, said Dr Jessada, which is why the hospital has not revealed an official cause of death.

“In the meantime, a medical team is being formed to investigate the case,” he said. “The case has been transferred to the Medical Council of Thailand so that it can be studied by a neutral party.”

Although Mr Numporn expressed his gratitude for the hospital’s compensation and doctors’ attendance at funerals, he vowed to continue fighting for justice for his lost loved ones.

“I still want to pursue a case against the doctor who performed the delivery,” he said.

Mr Numporn has filed a complaint with police against the doctor, but said that the doctor still has not contacted him or accepted any responsibility for the deaths.

“All I need is justice for the two people I loved the most,” said Mr Numporn.

Mr Numporn led a protest at Vachira Phuket Hospital on May 10 which prompted hospital officials to launch an inquiry into the circumstances surrounding the deaths (story here).

Four days later, traffic screeched to a halt as he led a funeral procession through the streets of Patong (story here). Mr Numporn apologized for the traffic jam, but vowed to remain steadfast in the fight for justice for his wife and son.