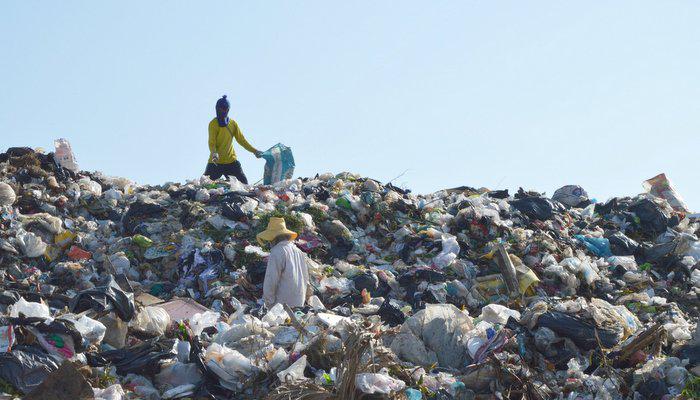 With Phuket’s primary incinerator out of action while awaiting repairs, an environmental expert is concerned about the facility’s capacity to burn medical waste properly. Chief among the concerns is avoiding the potential bacterial cloud from inundating the surrounding community at Saphan Hin.

PHUKET: The new 960-million-baht incinerator that fired up at Saphan Hin in 2012 is working at near-capacity, torching about 700 tons of trash a day.

Meanwhile, the original incinerator has been shut down pending budget approval of more than 530mn baht for a major overhaul (story here).

The extra load on the new burners is cause for concern, said Nutthakrit Polpetch, the Environmental Specialist at the Ministry of Natural Resources and Environment (MNRE) Phuket office.

“If the medical waste brought to the facility is not incinerated completely, what will happen to the surrounding community?” he asked.

The original incinerator, which was state-of-the-art when it was launched more than a decade ago, was designed to properly dispose of the medical waste delivered to Saphan Hin from the six major hospitals across the island, Mr Nutthakrit explained.

“There are no health issues when medical waste if incinerated properly. All bacteria are guaranteed to be killed when incinerated for one to two minutes at temperatures between 850 and 1,000º Celsius,” he said.

“The two burners in the incinerator that are still in operation can burn at temperatures up to 900ºC, which is hotter than the minimum temperature needed to safely dispose of medical waste,” he said.

“Although we mix the medical waste with other trash, we always ensure that burn temperatures are at maximum.”

Mr Nutthakrit questioned the ability of the current incinerator to consistently burn at maximum heat, especially with the onset of the southwest monsoon bringing heavy rains this month.

“As soon as you start adding wet waste to the mix, the burn temperature is guaranteed to fall,” he said.

Mr Prachum explained that about 1.2 tons of medical waste is delivered to the incinerator every day.
“We add about 200 kilograms to each burn to make sure all of the medical waste is disposed of on the same day. We cannot stockpile it and burn it later. That alone would be a health risk,” he said.

Activated carbon is used to remove all dioxins from air escaping up the smokestack, and a calcium oxide (quicklime) solution is used to reduce any acids from air and solid waste, explained Mr Prachum.

“We have sensors at the top of the smokestack to warn us if any unacceptable levels of pollutants are escaping into the air,” he noted.

“Also, all ash from the incinerator is placed into landfill pits that are lined with thick rubber walls. This ensures that no pollutants can leach into the soil and contaminate the ground or a water source.”

Mr Prachum proudly stated: “Our facility has passed every annual test conducted by the Pollution Control Department [PCD]. Please have faith in us, we have a good pollution control management system.”

Despite Mr Prachum’s claims, Mr Nutthakrit remains doubtful that the incinerator is safe when disposing of medical waste.

“First, the PCD tests can only find what they are looking for. The PCD tests for total suspended particulates (TSP), sulfur dioxide, nitrogen dioxide, hydrogen chloride, mercury, cadmium, lead, dioxins and the opacity of emissions from smoke at the incinerator,” he said.

“However, the PCD tests do not confirm whether or not harmful bacteria are being released into the atmosphere.”

Although the emissions from the smokestack might not be visible to the naked eye, Mr Nutthakrit explained that it does not mean the emissions are not harmful.

“As everyone knows, medical waste contains a lot of bacteria, and bacteria in the air can spread easily, especially when it is windy or if there is a lot of rain,” he said.

“This can seriously affect the people who live or spend much time in the area around there… The people most likely to be affected are those living in the Klong Koh Pee Community, the people who collect garbage from the landfill and the residents from Phuket Town who come to Saphan Hin Park to exercise.

“We have to make sure that we cause no harm to anyone.”

Mr Nutthakrit remains so unconvinced that the disposal of medical waste at the incinerator is safe that he sends teams of officers to conduct random checks to ensure the burners are operating at optimal temperatures.

“So far, every time we have checked, the burn temperatures were more than 850ºC, but that doesn’t mean we will stop keeping an eye on them,” he said.

“We must make sure that all trash is incinerated properly.”

Mr Nutthakrit admitted that he understood the staff at the incinerator were doing the best they could under the current circumstances.

“We have no choice. The appropriate incinerator will remain offline until Phuket City Municipality receives the budget to fix it,” he noted.

“The municipality applied for the 530mn baht in the fiscal 2015 budget. Other funds will be drawn from the environmental budget, too. They have our full support to get the primary incinerator fixed as soon as possible.”

However, Mr Prachum has previously pointed out that even after the budget is approved, it will take about two years to complete a full refit of the original incinerator.

Phuket Provincial Health Office (PPHO) Chief Dr Kajohnsak Kaewjarus said he had full confidence in the incinerator staff to competently dispose of all medical waste brought to the facility.

His main concern, however, is the medical waste that doesn’t make it to the site.

“Veterinary surgeries and small clinics are not bound by the same strict regulations that hospitals must adhere to, and so many of these businesses simply add their medical waste to their regular trash,” Dr Kajohnsak said.

Some clinics deliver their medical waste to the nearest hospital for proper disposal, but often the waste, bundled with daily refuse in a black plastic bag, is dumped on the street as regular garbage, or in an unsealed trash can to await collection.

Stray dogs can tear at the plastic bags in hopes of a sniff – or a taste – of what’s inside, Dr Kajohnsak explained.

To combat the problem, the PPHO has joined a trash-separation project that is to launch in Phuket on World Environment Day, June 5 (story here).

Under the project, special refuse bins slated for medical waste will be installed at locales throughout Phuket.

“Garbage trucks dedicated to medical waste will collect the waste to ensure it is not mixed with regular trash when it is picked up,” the health chief explained.

“It will help to ensure that medical waste is collected properly and not mixed with regular trash when it is brought to the incinerator.