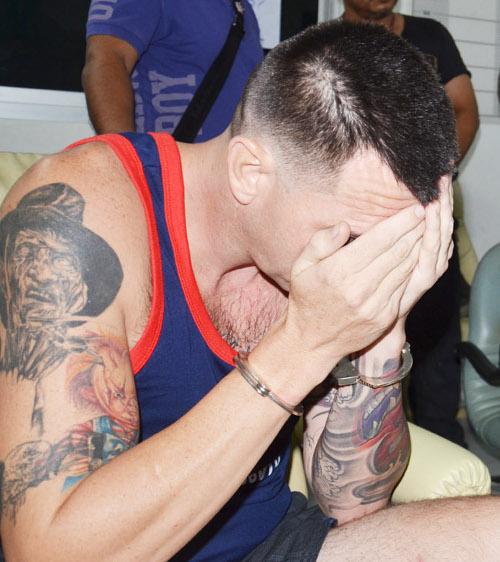 Their intended target was a man initially named by police only as “Dannie”. However, police yesterday confirmed that the man’s real name is Dennis Knudsen.

“We have been informed that ‘Dannie’ is a Danish national and that his real name is Dennis Knudsen,” Patong Police Deputy Superintendent Akanit Danpitaksat told the Phuket Gazette.

“Apparently he also has identification documents issued in the name of [name has been removed*],” he added.

However, Lt Col Akanit told the Gazette this morning that Mr Knudsen is wanted only for breaking bail conditions. Police are not looking to question him over the street shooting episode.

“Since he failed to turn up in court on Tuesday, the Phuket Provincial Court has notified us that he is now wanted by the court for breaking conditions of his bail,” Col Akanit said.

Mr Knudsen was to appear at Phuket Provincial Court to resolve a dispute with the two Australians Mr Cohen and Mr Shea about a “big bike” worth about 300,000 baht.

He apparently rented the motorbike, but later sold it.

Mr Knudsen was arrested by Pattaya Police on September 20, 2012 on outstanding embezzlement charges. The warrant, number 432/2555, was issued by the Phuket Provincial Court on August 27, 2012.

After his arrest by police in Pattaya last year, Mr Knudsen was handed over to the Patong Police.

“Our investigation focuses only on the shooting incident. We have arrested the two suspects and we have their statements. We are now ready to transfer the case to the public prosecutor,” Col Akanit said.

“The dispute over the [alleged] embezzlement is a separate case to be resolved as a civil matter in the court,” he added.

They have both been charged with attempted murder for Tuesday’s failed assassination of Mr Knudsen.

*The name given to the Gazette by police was removed by request, as the person whose name allegedly used as an alias by Mr Knudsen fears for his own safety.