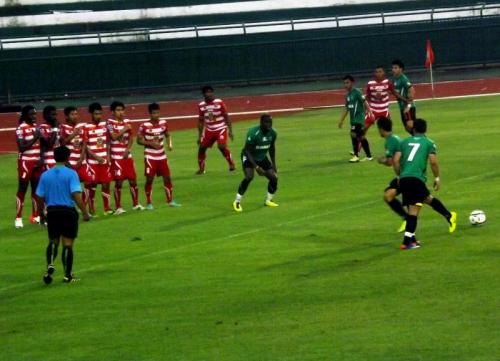 The Islanders continued their pre-season preparation ahead of the upcoming 2013 Yamaha League 1 season by playing PhangNga FC in a friendly at Surakul Stadium last night.

The match gave Phuket’s new signings the chance to get to know each other in a match situation, and with unlimited subs and three 35-minute period, instead of the standard two 45-minute halves, the impetus was mainly on match fitness and practicing tactics rather than the final score.

A total of five goals were scored, three of them by the home team.

PhangNga took the lead against the run of play after great interplay at the edge of the Phuket box allowed PhangNga’s Thara Da-koh the chance to take a shot from 20 yards out, his strike going into the top corner.

Prior to the goal, Phukets’ Geoffrey Doumeng was dictating the pace of the game in midfield and his defense splitting pass to Thai striker, Chano Sonwiset in one-on-one with the PhangNga goalie really deserved a better finish than the soft shot straight at the keeper.

Brazilian Dudu showed flashes of skill fans will be hoping he can pull off against teams in Yamaha League 1. Even though certain players did stand out, Phuket FC struggled to work as a unit and it was clear to see that the players are still unaccustomed to each other.

Giant center back Moudourou Moise looked to be a pace or two off the game and his poor touch put the team under unnecessary pressure.

Nonetheless, he may use his strength and power to form a formidable defensive partnership with defensive stalwart Nenebi.

Down 1-0, Phuket equalized through a sublime free kick from Dudu just outside the 18-yard box. The ball dipped over the wall and found the bottom corner leaving the PhangNga keeper rooted to the spot.

Phuket’s defensive frailties allowed PhangNga to retake the lead from a corner. With Nenenbi on the bench until the third period, Phuket’s backline lacked a commanding presence and this was evident as the Islanders failed to clear the ball, allowing PhangNga an easy header from 6 yards.

Phuket continued to create chances and as the game went on it looked certain that they would score.

Phuket’s captain, Niran Panthong had a glorious chance to equalize, smacking the ball off the bar and then blazing his rebound over from 6 yards with the goal beckoning.

Tongchai Kuenkhunthod struck a 30 yard screamer that rattled the PhangNga bar. Giorgi Tsimakuridze was introduced to the game in the third period and he took control of the match, scoring a tap in and sealing the win with his second of the game moments later.

He could have had a hat trick, but again, as was evident throughout the game, lack of familiarity among the players meant a lot of passes were misplaced.

The signs are encouraging for Phuket FC and new players Geoffrey Doumeng, Dudu, Giorgi Tsimakuridze and Yagin Chan look to have that extra bit of class the team needed. The others may need more time to settle in and adapt to the new-look Phuket FC.

After the match, Geoffrey Doumeng told the Gazette that his team were initially under a lot of pressure. “It was difficult at first because we really wanted to score. As soon as we did score, things become a lot easier.”

Commenting about his first match with Phuket, Moudourou Moise said that he is confident about the team. “There are a lot of new players on the team so we didn’t play so well together. We will continue to work hard and we are young so have a good chance to be a real good team.” Moise has played for Suphanburi and most recently with Thai Premier League side, Chainat FC.