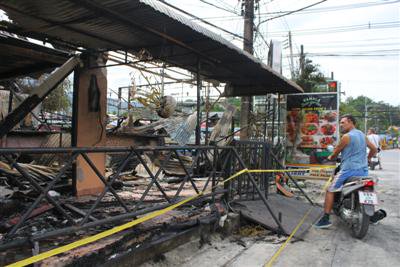 PHUKET: The owners of a beer garden that went up in flames in Phuket early this morning are denying rumors that the blaze was set by a disgruntled former employee.

It took six fire engines about an hour to extinguish the fire that gutted the Kamala Beer Garden on the main road through Kamala before dawn today.

Owners Chollada Nakballang, 31, and her Canadian boyfriend Greg Layton, 51, were asleep in a room upstairs in an adjacent house when they smelled smoke and tried to scramble to safety.

The found themselves trapped inside as a metal roll-up security door downstairs became stuck.

Knowing the pair were trapped inside, neighbors outside tried frantically to pry the door open.

Ms Chollada ran through the beer garden and managed to use a chair to scale a wooden wall to safety, but injured her leg in the process.

Mr Layton, still trapped inside, was finally able to escape when a neighbor managed to tear away part of the metal door, creating an escape hole.

Six fire trucks from Kamala, Patong and Cherng Talay responded to the fire, but the entire establishment was ablaze by the time they arrived.

Phet Somnongwa, a 50-year-old masseuse at the nearby Angel Massage parlor, said it took about 30 minutes for the first firefighters to arrive.

He denied a report that a former staff member was suspected of intentionally starting the fire.

The couple bought the beer garden about a month ago and did not have any insurance to cover the cost of the damages, which they estimated at about four to five million baht, they said.

Phuket Police round up Rohingya refugees in Nai Harn