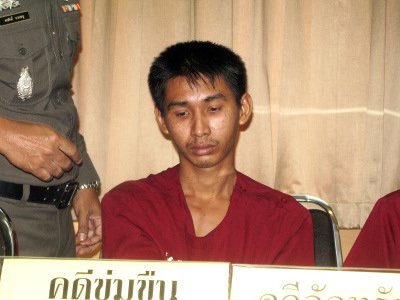 PHUKET: Phuket City Police held a press conference on Wednesday to announce the arrest of a Wichit man arrested for raping a young woman at gunpoint and then stealing her computer.

On the night of June 29, the victim reported that a man entered her rented room with a gun and raped her. The rapist then stole the victim’s laptop computer before leaving the room.

After the assault, the victim managed to escape and went to report the case at Phuket City Police Station.

Subsequent investigation revealed that the alleged rapist was Mr Wuttikrai, employed as a van driver by a company in Wichit.

After his arrest at the company offices on July 8 he confessed to all charges.

Phuket Provincial Police Commander Pekad Tantipong said Mr Wuttikrai represented a threat to women everywhere and deserved the punishment he would get.

Also shown to the press at the same press conference was 25-year-old Ekasit ‘Ek’ Kittivech, who was arrested for the sale of ya Ice (crystal methamphetamine) on July 8.

After informants told police Mr Ekasit was involved in the sale of ya Ice, investigators called him and arranged to buy a half gram of the drug for 1,000 baht.

Arrested on Soi Tiam Pracha-uthit in Rassada at about 1am, Mr Ekasit was found to be in possession of another 0.6 grams of the powerful stimulant, the police said.

He was charged with possession of a Category 1 substance with intent to sell.