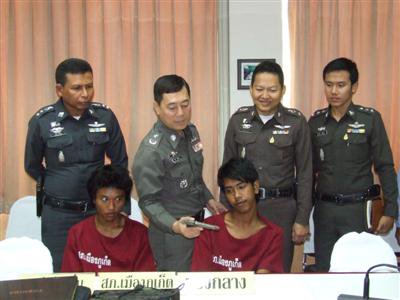 PHUKET: Phuket Police took just a few hours to track down and arrest three teenagers wanted for the strangling murder of a Phuket resort worker yesterday.

Police presented two of the suspects to the press at Phuket City Police Station this morning.

The suspects were identified as Charin “Mutt” Chokekue and Kittiphum “Phum'” Jutangka, both 18-year-old residents of Phuket.

The third suspect arrested, a 17-year-old male, was not presented to the press.

Two other suspects, identified as Panuwat “Boy” Klindee and Jirasak “Poe” Siriwong, are still at large.

“Boy” was described by police as a gik (casual sex partner) of the victim, who reportedly enjoyed the company of young men and boys, police said.

Police said Poe was not at the scene when the four other members of the gang strangled Mr Yusop, stuffed his body under a bed, and drove off with his possessions, according to the other suspects.

Led by Phuket Provincial Police Commander Pekad Tantipong, police said investigating officers used information about the motorbikes used by the gang – including one stolen from the victim – to track the group down to a nearby stretch of Phattana Thongthin Road bordering the Klong Mudong estuary in Wichit.

Mutt and Phum were arrested at the scene, but Boy and Poe fled on motorbikes.

Subsequent questioning of the suspects led to the arrest of the third suspect at a municipal housing estate in Wichit less than an hour later.

The youth was found in possession of a homemade .38-caliber handgun.

Also presented as evidence at the press conference were two Yamaha Fino motorbikes, an Indonesian banknote, a notebook computer, a DVD player, a wristwatch and two sets of keys.

Many of the items were stolen from the victim, police said.

The trio confessed to charges including conspiracy to commit premeditated murder, robbery and a weapons charges, police said.

Police are still searching for Boy, who appears to have played a key role in planning the killing.

*The killing followed an altercation that began after the victim continually tried to fondle the private parts of Mutt, police quoted the suspects as saying.*

German victim of Phuket mob bashing out of coma