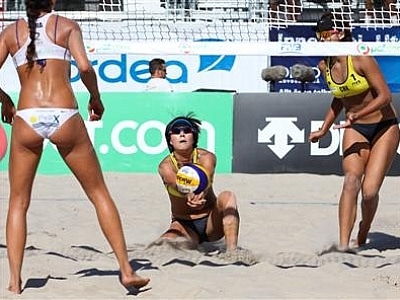 PHUKET: The 6th Swatch FIVB Beach Volleyball World Tour is set to make Karon Beach its stage again this year, starting November 1, despite the possibility of the event moving elsewhere in the future due to a lack of funding from Phuket, organizers say.

The Phuket Thailand Open, which is a women’s tournament, has been growing in popularity and scope, with tourists filling the stands and inter-school and inter-hotel satellite competitions running in conjunction.

Geoffrey Rowe, managing director of event organizers Pentangle Promotions, explained to the Phuket Gazette that a change in venue was not possible because of timing restrictions set by the Federation Internationale de Volleyball (FIVB).

“Every year, I have to go to a meeting in Lausanne, Switzerland, at the head office of the FIVB, one to two weeks after our [Thailand] tournament. If I’m not ready to change the venue by then, they won’t let me change it,” Mr Rowe said.

Changing the venue was not a simple process, as FIVB requires a large amount of information to be presented which, if not ready in time for the meeting, means changing the venue would not be possible, Mr Rowe explained.

Asked whether the event would remain in Phuket, Mr Rowe described the island as an ideal venue, but remained uncertain about the future.

“At the moment we have no final decision [about] where the event will go in 2012. It is a big event. Many people are interested in taking the event to their province, or even to other countries in the region. We are still considering it,” he said.

“We have an agreement with the FIVB until next year. So, next year we will decide whether to continue here or not. It is like an evaluation to consider whether it is worthwhile.

“For us, financially, it is not very good. It costs a lot of money and it is quite hard in Phuket because most of the spectators are foreign people. So, sometimes it is hard to get sponsors because they are looking for the Thai audience,” he said.

“I’m not sure whether Phuket really wants the event. I get the feeling that Phuket has enough [events] already, and that it is not necessary to have another big event. It really depends on if they really want it or not.

“Phuket is the best venue, which is why we have been using the location. But if they don’t really want it, what is the point of us doing it in Phuket?” he added.

The “Phuket Thailand Open Powered by PTT” 2011 is set to be held on November 1-6 with up to 25 of the world’s top-ranked women’s teams competing.

Mr Rowe was optimistic about attendance and the benefits the event would bring to Phuket’s economy.

“The reception of the audience [last year] was great. Six thousand people attended the final rounds on center court each day for the last two days,” Mr Rowe said.

As Thailand is the last stop on the 16-event tour, many players stay after the event is over and holiday here with family and friends, he said.

The Phuket Gazette is a proud sponsor of the Phuket Thailand Open.