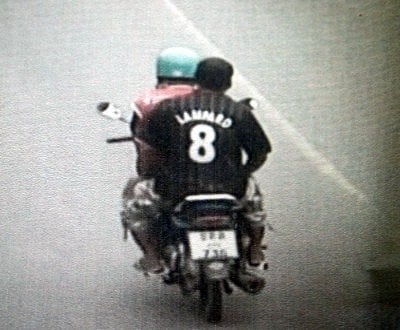 PHUKET: Phuket City Police have identified one member of the brazen gold bandit duo who robbed a shop of about 3 million baht worth of gold jewelry yesterday.

Police identified the man only as “Son”, a roadside food vendor.

After a dragnet attempt at a fish factory left police empty handed, they raided Son’s home, only to find that he and his wife had already fled the premises.

After the motorbike used to commit the robbery was found abandoned, CCTV captured a second motorbike carrying one of the culprits. The license plate revealed that it was registered to a motorbike taxi driver, explained Phuket Provincial Police Commander Chonasit Wattanavrangkul today.

“After questioning the motorbike taxi driver, he told us where the suspect had asked to be taken,” said Maj Gen Chonasit.

“Police officers questioned neighbors who explained that the man who lived in the house had come home earlier that day and rushed out with his wife at about 5pm yesterday,” Gen Chonasit explained.

All police stations in Region 8 have been contacted about the case, he added.

“I will call together a Phuket Police investigation team for a meeting later today to determine any possible escape routes the two thieves may have used,” Maj Gen Chonasit said.

The other member of the dynamic duo remains unidentified.