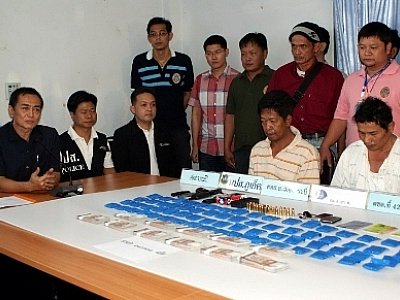 PHUKET: After a gunfight and a chase through a rubber plantation, police on Wednesday arrested two men in connection with a drug-trafficking network that allegedly spanned from Phuket to Malaysia.

One of the men was a known kingpin already wanted by police in Bangkok.

Police presented the suspects – Krabi resident Songchai “Aied” Chumpon, 51, and alleged associate Paechon Navadej, 55, from Songkhla – to the media at a press conference at Muang District Office in Krabi on Wednesday.

Such was the importance of the bust that Krabi Governor Prasit Osathanon, Krabi Provincial Police chief Witthayadej Woradilok, and Phuket Drug Suppression Unit chief Sutthirat Toljumpa were among the many high-ranking officers who attended.

After an investigation revealed that Mr Songchai was a major drug dealer, undercover police called arranged to buy 14,000 ya bah (methamphetamine) pills for 1.7 million baht in a sting operation, police said.

Mr Paechon arrived in another pickup.

With the deal done, the pair drove off, but Klongtom District Police set up a roadblock to intercept the two vehicles.

A gunfight ensued and the pair tried to escape into a rubber plantation, but eventually they were taken into custody.

No one was injured in the shootout.

Among the items presented as evidence were the 14,000 ya bah pills, firearms and ammunition, the two pickup trucks, a walkie-talkie and a mobile phone.

“It is a big achievement to arrest two major drug dealers who have a big drug trafficking network in Malaysia,” Maj Gen Witthayadej told the media.

“Mr Paechon is a dual citizen of Thailand and Malaysia and is wanted on a warrant issued by the Criminal Court in Bangkok,” he added.

AFL Phuket dishes out another night of thrills