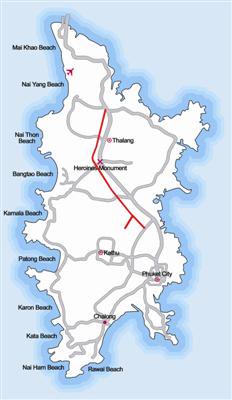 PHUKET CITY: Phuket Governor Wichai Phraisa-ngop will make construction of a second north-south artery the top priority among the four new road projects he will push for the island.

Presently, Phuket has only Thepkrasattri Road to connect Phuket International Airport to most parts of the the island.

With the airport’s planned upgrade allowing it to accommodate 11.5 million passengers a year by 2016, Gov Wichai said he was concerned about the future impact such an increase in arrivals would have on traffic.

“I want to finish construction of the second Chalermprakiat Road before the expansion of Phuket International Airport. If we have an airport unloading 11.5 million tourists a year before the expansion is complete, it will spell traffic chaos on Thepkrasattri Road,” he said.

The first Chalermprakiat Road, so named to honor of HM The King, is referred to as the bypass road by most island residents.

The proposed route would follow electric power pylons all the way from a point near the airport to the bypass road in Koh Kaew, a total distance of around 21 kilometers.

If approved, the road would form a second north-south artery connecting with many other roads along its length.

Because of the presence of the power lines, large trucks and other vehicles over a prescribed weight would be banned from the new road.

The proposed roadway would not require expropriation of any private sector land as it would be built on state land currently under the control of the Electrical Generating Authority of Thailand, or EGAT. That agency is already studying the proposal, Gov Wichai said.

Gov Wichai said he will help the Phuket Highways Department seek the 3-million-baht budget it needs to hire a consulting company to conduct an initial project study.

The department estimates the work can be completed within two months, considerably faster than if the task were carried out by a state agency.

For information about the other three road projects, click here.