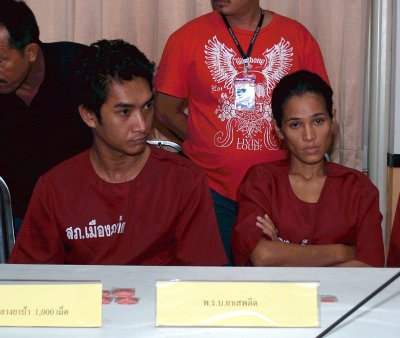 PHUKET: Phuket City Police have arrested a man and his pregnant girlfriend for drug dealing, seizing over 1,000 ya bah (methamphetamine pills) in the process.

The arrests were announced at a press conference at Phuket City Police Station this morning.

The arrests resulted from good police work that started with the arrest of 30-year-old Kalasin resident Chonladda “Nui” Siricane at 6pm on July 12.

She was charged with possession of a Category 1 narcotic with intent to sell at her apartment on Soi Suwanna, near Robinsons department store in Phuket Town. Eight ya bah pills were seized.

Ms Chonladda, currently in the early stages of pregnancy, told police she got the eight pills from her boyfriend, 36-year-old Bangkok resident Yotsakorn “P” Yod-arj.

Mr Yotsakorn was scheduled to arrive by bus from the capital at 8pm on Tuesday.

Police arrested him after he stepped off the coach in front of the Siam Commercial Bank branch at Rajabhat junction on Thepkrasattri Road. One thousand pills were seized and the suspect was taken to Phuket City Police Station to be charged with possession of a Category 1 narcotic with intent to sell.

Five of their sub-agents or customers were arrested in a sting operation with small amounts of ya bah or ya ice (crystal methamphetamine) at around 7:30pm on Tuesday at the Pure Mansion apartment complex on Chao Fa East road.

Maj Gen Pekad said that about 200 people are arrested on drug charges in Phuket City Police District every month.

Figures released by the Phuket Provincial Police put the number of drug arrests on the island last month at 397, an increase of 44% year-on-year.

“Each time the police arrest a ya bah seller, we investigate and try and get all of their network. This is a policy from headquarters in Bangkok. Drug sellers work in teams, so we have to work as a team also,” he said.

“Arresting drug dealers is not the real solution. What we really need to do is teach Phuket’s young people about the dangers of drugs so they will not to get involved with them in the first place. This will help them protect themselves,” he said.