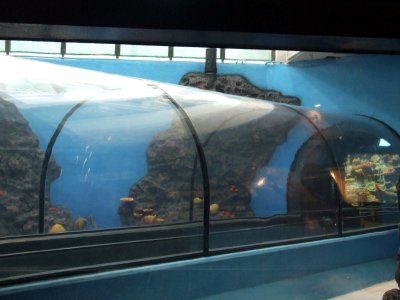 PHUKET: Phuket Aquarium’s 2.2-million-baht renovation project is on schedule to finish this month, officers at the Phuket Marine Biological Center (PMBC) have confirmed.

The work involved draining the large viewing tank with a glass walk-through viewing tunnel, as well as work on five smaller tanks.

“The paint on the back wall started to peel and wasn’t very beautiful. It needed to be fixed,” Mr Surapong said.

The smaller tanks have been repaired and are in the water-testing stage while work continues on the larger tank, where lights are now being installed, he said.

“Later this week we will fill the larger aquarium with water and let it sit in for awhile before draining it again. We will have to do this a few times to flush out unwanted chemicals and odors.

“The construction will finish on July 21, but we have to make sure the quality of water is high. After that we can release the animals in the water, probably by the end of the month,” said Mr Surapong.

Sections of the Phuket Aquarium remain open to visitors.