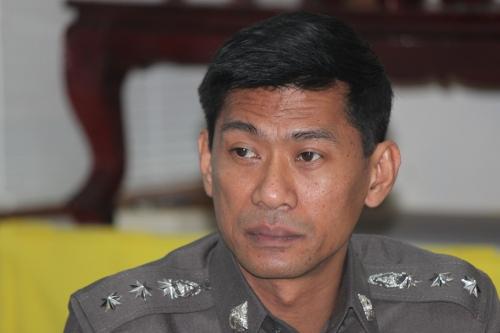 PHUKET: Police have made headway in identifying and capturing the murderers of a Phi Phi speedboat driver who was stabbed to death in Phuket Town just before dawn yesterday.

Ronnachai Chayliang, 26, was found dead in front of Wat Wichit Sangkharam, on Narisorn Road, at about 5:20am. He had suffered knife wounds to his neck, chest and back.

“The body was in the middle of the road… He had a five-centimeter slash across his neck, two stab wounds in the chest and one in his back. Not far from the body we found his motorbike,” said Phuket City Police chief Sermphan Sirikong.

“We believe that he died less than an hour before we arrived at the scene,” he added.

Police believe Mr Ronnachai was murdered while driving home to his accommodation in Phuket Town.

“We have checked CCTV images along Montri Road, which Mr Ronnachai drove past before he turned onto Narisorn Road,” Col Sermphan said.

After reviewing the CCTV footage, police were able to identify the men seen pursuing Mr Ronnachai through the streets of Phuket Town. They believe these men are the killers.

“It’s very likely he had an argument with some people beforehand. It doesn’t seem to have been a robbery, as Mr Ronnachai’s possessions, including his wallet and phone, were still at the scene,” he explained.

There was also no evidence of drugs or alcohol.

“We also checked Mr Ronnachai’s emails, Facebook account and diary for clues about the motive for the murder, as well as clues about the suspects. We questioned his mother and his wife, but they were unable to provide many details relevant to the case,” Col Sermphan said.

Now armed with images and the identities of the prime suspects to the murder, police believe they will make arrests soon, he added.