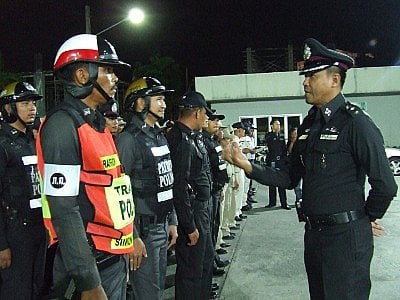 PHUKET: Phuket Provincial Police Commander Chonasit Wattanavrangkul has ordered all police stations across Phuket to take part in the formation of a “Special Operations Unit” in order to boost patrols in key tourist areas from 9pm to 4am.

“I have to admit that we do not have enough police officers here to be able to monitor all areas closely,” Maj Gen Chonasit explained.

“That is why I have asked for special assistance from all police stations in Phuket to designate officers to help with the formation of a ‘Special Operations Unit’ so we can patrol main tourist areas, such as Kata, Karon, and Patong,” he added.

Maj Gen Chonasit said he had also ordered officers to co-ordinate with local people in each area to help prevent crime and to provide assistance to tourists in need.

“This will help tourists feel safe during their visit here and it will help to restore their confidence in Phuket as a tourism destination,” he said.

Maj Gen Chonasit pointed out that southern Phuket was suffering from higher crime rates than elsewhere on the island.

“I looked at our records and found that most of the crimes committed in Phuket have been in the areas that Chalong Police Station is responsible for,” said the police chief.

Governor Tri stressed the importance of how the many negative incidents in Phuket directly affect Phuket’s reputation as a tourism destination.

“This is one of the most important issues that everyone has to discuss together: how we can better improve our public safety. We need to regain tourists’ confidence, as well as that of local residents. Perhaps, we should be more stern in enforcing the law as part of our safety measures,” said Governor Tri.

“I have to thank the police for arresting the two men who attacked the two Australian tourists [Michelle Smith and Tammee Lee Lynn]. However, everyone should still pay attention to the issue of safety.

“Phuket is a popular holiday destination and a lot of tourists come here all year round. We can generate a lot of money for Thailand through tourism alone. But if we let tragic incidents like this happen again, no one will want to travel to Phuket,” he said.

Drug suspect caught in Phuket after year on the run