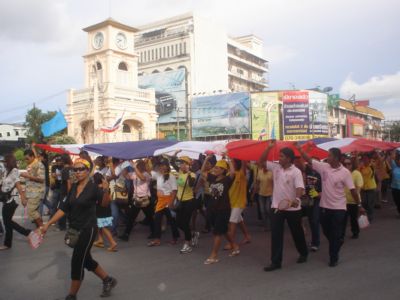 PHUKET CITY: About 1,000 protesters marched on Provincial Hall this afternoon in support of the People’s Alliance for Democracy (PAD) demonstrations in Bangkok. The PAD wants Prime Minister Samak Sundaravej to resign.

The large crowd was bolstered by many people who had turned out to rally against the violence in Bangkok last night that left one PAD member dead and several others injured, resulting in PM Samak declaring a state of emergency in the capital this morning.

Natjarong Ekpermsup, President of Phuket Watch, told the Gazette, “We are here to show our support for the Bangkok PAD, who are trying to oust Samak. We do not want the airport blocked as we need it ourselves so that we can send reinforcements up to Bangkok.

“I can’t say how long the protest will stay here because it really depends on the government. I have contacted the Krabi PAD and told them to protest at their Provincial Hall rather than at their airport.”

Clarifying why protesters were still at Phuket International Airport, he said, “Now, at the airport there are about 200 people who refuse to follow PAD instructions. They are not PAD members, they are just bystanders protesting and we have asked them to join us here at Provincial Hall.”

However, Khun Natjarong forewarned that the PAD may yet step up its campaign. “On September 3 [Wednesday], electricity and water supplies to government offices will be cut off. I think the government is cornered now so they have to hire NorPorKor [“mob agitators”] to try to disrupt peaceful protests.

“In my opinion, Samak’s government announced the state of emergency in Bangkok to divert attention from the main issue, which is him resigning.

“We will meet the governor and ask him to forward our request to the government to stop using violence against the people. There should be no double standards. They should not block the PAD and then allow the United Front for Democracy to do as they please.”