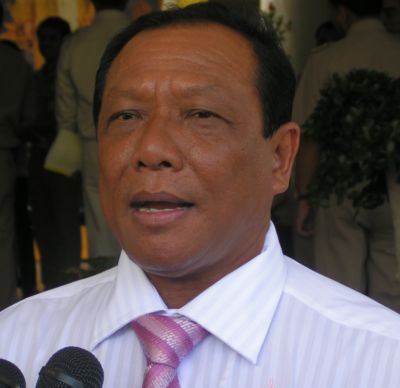 PATONG: Pian Keesin, the recently re-elected Mayor of Patong, yesterday announced he will continue with his plan to build a tunnel under the hills separating the popular beach resort town from Phuket City.

“We plan to set up a budget to study and research the impact of building a tunnel, in the hope that – if there are no objections – we can finish the research and design stages within a year and a half,” he said.

However, Mayor Pian admitted that the project was still a long way from being a reality. “Whether this project will go ahead is dependent on environmental factors as well as tourism and how local businesses, organizations and people will benefit from it.

“We are still talking with investors and considering how much budget should be set aside for research before we decide on a big project like this,” he said.

Khun Pian was installed in his second term as Patong Mayor after being cleared of three complaints of vote-buying by the Election Commission in Bangkok on August 20.

Yesterday, he announced his seven-point platform, in which he pledged:

1. Education: To have Wat Suwankiriwong School and Baan Kalim School brought under the responsibility of Patong Municipality; to set up two childcare centers; and to support having a sports complex built at Tri Trang Beach.

2. Society: To improve the quality of life for the elderly, the handicapped and HIV sufferers.

3. Administration: To have Patong Municipality improve its effectiveness through developing its officers’ skills.

4. Economy and tourism: To build a food court at Loma Park, to develop the quality of tour guides, to boost investment for development, to preserve the environment in Patong, to support a change in the law so that buildings can be above the current limit of 80 meters above sea level.

5. Public utilities: To finish Phang Muang Rd and to support having a Kathu-Patong tunnel.

6. Natural resources and environment: To improve wastewater treatment and to have cleaner water in Patong Bay.

7. Safety and security: To install more CCTV cameras and to have more volunteers on the street to help tourists.

After Mayor Pian announced his policies, councilor Prasert Pattakor of the Patong Gao Na party, which opposed Mayor Pian’s Rak Patong party in the recent election, pointed out that K. Pian’s policy of allowing buildings over the 80m limit contradicted his own environmental policy of preserving green areas in the resort town.

Mayor Pian has yet to announce who will be his “Deputy Mayors” and his consultants, which are non-elected positions.