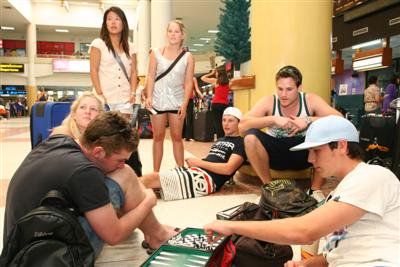 THALANG: The Phuket branch of the People’s Alliance for Democracy (PAD) has “no plans” to close down Phuket International Airport again, according to a spokesman.

The number of unscheduled flights in and out of Phuket has been increasing in recent days, with foreign governments arranging special flights for people stranded in Thailand by the closure of Suvarnabhumi and Don Muang Airports in Bangkok by PAD protesters. Many have chosen to use Phuket Airport, normally the third busiest in Thailand, to get their citizens home.

His group, which goes by the name Phuket Watch, currently has no plans to close down Phuket Airport, he confirmed.

Phuket Governor Preecha Ruangjan earlier told reporters that the province was keeping a close watch on the movements of PAD supporters in Phuket.

Airports of Thailand (AOT), which runs Phuket Airport, beefed up security after a PAD protest at the airport resulted in a two-day closure in August.

After that incident was very poorly received by the island’s tourism industry, Phuket Watch held a press conference blaming the closure on an unnamed “third party”.

The Bangkok airport closures have also left an estimated 60,000 to 70,000 Thais stranded abroad and flights are being arranged to get these people home.

The remains of one of the two Thais killed in the terrorist attacks in Mumbai, India last week were repatriated home to Phuket on a Silk Air flight from Mumbai that landed at Phuket Airport at about 2 pm today.

The woman was identified as Jirapat Kanchanawaree, a Phuket native in her mid-twenties who had been working in a hotel spa when it was attacked by terrorists. Her body was claimed by relatives at the airport.

The closure of the two airports in Bangkok has also crippled domestic air traffic, with longer-than-normal waits for flights to regional locations like Koh Samui.

AOT has arranged a special 800-baht bus service from Phuket airport to Bangkok and Chonburi to help people get off the island.

Some foreigners told the Gazette over the weekend that they had been waiting three days to get a flight out. Despite their obvious discomfort, they said they understood the situation in Thailand and the causes behind it.