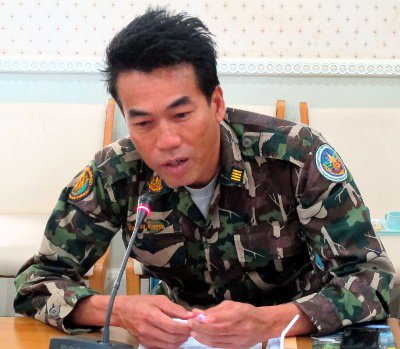 PHUKET: The 366 officials who will investigate all privately-owned plots of land along the boundary of Phuket’s Sirinath Marine National Park have been named and will commence before the end of the month.

The news was announced by Sirinath National Park chief Cheewapap Cheewatham at a meeting at Provincial Hall today.

“We expected to report by the middle of this month which teams will be responsible for which areas. We plan to start the investigation by the end of October,” Mr Cheewapap explained.

The officers will investigate 379 plots suspected of encroaching on more than 3,000 rai of land in the park.

“If everything goes according to plan, we hopefully will finish the investigation before January 2013,” Mr Cheewapap added.

He also pointed out that his officers will begin tackling the issue of restaurants along the Nai Thon beachfront encroaching on park land.

“All restaurants along the Nai Thon beachfront are within the national park boundary. Actually, in 2008, the Sirinath National Park chief at the time coordinated with the [local authority] Sakoo Tambon Administration Organization [OrBorTor] and notified the restaurant owners of this and tried to bring them under regulation. The owners at that time agreed and cooperated well,” Mr Cheewapap said.

“Beach vendors were permitted to install temporary shelters for selling food and other things, but no permanent structures were allowed.

“Now, four years later, they have tried to extend their restaurants, put more chairs and tables on the beach, built permanent rooms and toilets. We cannot allow this. It is time to start enforcing the regulations fully again,” Mr Cheewapap warned.

An inspection by his officers today revealed there are 12 restaurants along the Nai Thon beachfront that are allegedly encroaching on park land, he added.

“We consider the beachfront road as the boundary and it can be marked by GPS. As I mentioned, the restaurant owners complied in 2008, so I believe they were informed of this back then,” Mr Cheewapap said.

“I now have to call in the restaurant owners and officers from the Sakoo OrBorTor to clarify the park boundary and how we will go about redressing the issue,” he said.