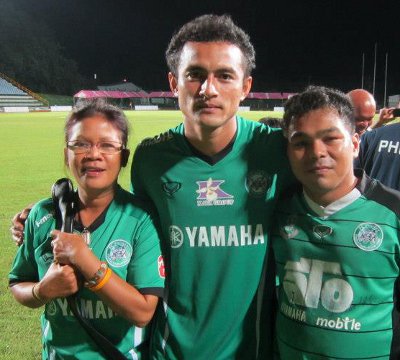 Lucky to be alive, he is reported to be safe with no serious injuries.

“Pae has got some minor scratches, but he is safe. He was examined by hospital doctors and he has not suffered any broken bones or any serious injuries from the accident,” Paitoon Silapawisut, the personal secretary of Phuket FC President Pamuke Achariyachai, told the Phuket Gazette this afternoon.

Mr Paitoon, who also announced the news on the Phuket FC fanclub Facebook page (click here), told the Gazette that Mr Watcharapong was driving alone to his home in Thung Yai District, in Nakhon Sri Thammarat province, when the accident happened.

“He stopped to eat at Sapam [in Phuket] before driving home, but he fell asleep while driving and his car ran off the road and hit a tree. The car flipped onto its side and into a ditch. He was knocked unconscious for about an hour,” Mr Paitoon explained.

“Pae woke at about 3am and crawled out of the car to wave down passing motorists for help, but nobody stopped. He searched inside the wreck for his mobile phone and called his mother and relatives, who called for rescue workers to assist him,” he added.

Mr Paitoon said that Mr Watcharapong was just tired and had not drunk any alcohol before making the four-hour drive home. “He was about two kilometers from his home when the accident occurred,” Mr Paitoon said.

Mr Paitoon also told fans not to worry about the upcoming match this weekend.

“He can still go with the team for the match in Suphan Buri on Saturday. However, whether he plays or not depends on him as he is still in shock,” he added.

He was appointed captain of the club earlier this season when former captain Suphat Anthong announced his transfer to Ratchaburi Mitrphol FC.