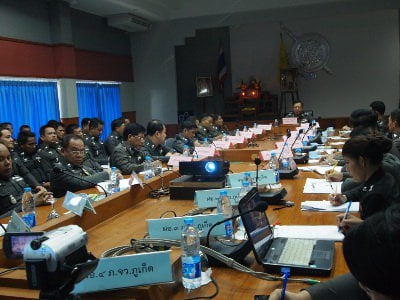 Gen Chote was installed as Phuket’s top cop yesterday after arriving from Narathiwat in Thailand’s troubled Deep South, where he served as provincial police commander.

His first order to the police chiefs of every police station on the island was to prepare for the upcoming tourism high season.

“A new Tourist Safety and Information Center will be set up in Patong to assist tourists. This will be staffed by Provincial Police, Tourist Police, officers from the TAT [Tourism Authority of Thailand] and interpreters,” Gen Chote revealed.

“This will be our first Tourist Safety and Information Center. Others will be set up across the island later,” he added.

Included in his plans is the expansion of the Patong Safety Zone to the rest of the island.

The general also called for more stringent checks at the Tah Chat Chai Police checkpoint at the north end of the island.

“This is the only way on and off Phuket by road, which makes it the easiest place to catch drugs and illegal firearms being smuggled onto the island,” he said.

Turing his attention to the “War Against Drugs”, Gen Chote ordered his superintendents to target dealers.

“Phuket is a tourism destination. People should be coming here to enjoy nature and activities – not coming here for drugs,” Gen Chote said.

He also told his police chiefs to clear out cold cases.

“Get moving, make arrests and close cases. We should be solving as many cases as possible. I suggest you start with outstanding arrest warrants,” he advised.

Among Phuket’s most notable unsolved cases is the assassination in
broad daylight of local newsman Wisut “Ae Inside” Tangwitthayaporn.