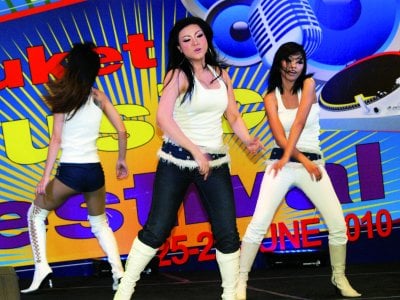 Morakot Suddee, Director of the Tourism Authority of Thailand’s events promotion division, said the free-admission event will be very similar to the inaugural Roy Fest held in the same location last year, but with a wider variety of music including dance, pop, hip hop, reggae, ska and bossanova.

“We believe that the Phuket Music Festival will be unforgettable; Thailand’s largest beach dance floor under the moonlight,” he said.

Asked why the sponsors changed the name from Roy Fest to the more generic Phuket Music Festival, Ms Morakot said, “We thought a lot about the name change. Roy is a transliteration of the southern Thai word that means ‘great’, but when written in English many foreigners confuse it with the male name ‘Roy’, thus we decided to change it to something easier for foreigners and musicians.”

The main purpose is to promote low-season tourism while trying to grow the event to the same popularity as the Pattaya Music Festival or Hua Hin Jazz Festival. The difference is that the Phuket event will have more of a dance music atmosphere, suitable to the fun character of Phuket, he said.

The event kicks off at 6pm tonight and stage entertainment is scheduled to end at 2am on both nights.

The Meteorological Department’s forecast for the 24-hour period starting at noon today calls for cloudy conditions and widely-scattered thundershowers over 30% of the island.