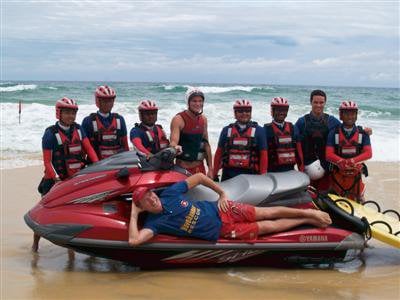 PHUKET: Thai and Australian lifeguard trainers last week staged a surf rescue demonstration at Karon Beach to show local officials how jet-skis, when properly used, can save lives rather than imperil them.

Mr Field was in Phuket to lead training sessions for the Phuket Lifeguard Club, which currently runs lifeguard services on Phuket’s main beaches.

The demonstration highlighted how jet-skis can reach people in distress much faster than lifeguards on paddle boards. The key point is that the faster victims are retrieved from the surf, the better their chances of survival.

“Rescue jet-skis with a sled board on the back are very helpful in getting the patient back to the beach quickly and safely. The number of drownings would be reduced if jet-ski operators knew how to use it as rescue device,” Mr Field explained.

Thanachai Lekvanichkul is division head of marine products at Thai Yamaha Motor Co, which provided the jet-skis used in the demonstration.

The company has an office on Thepkrasattri southbound in Koh Kaew.

“Tourists drown or are involved in marine accidents every year in Phuket. So we would like to improve the rescue skills of lifeguards so they can train jet-ski operators, who will in turn be more skilled at saving people in distress.”

“Those sad stories of drowning might not happen if jet-skis were put to better use as rescue aids,” he said.

A press release issued by Yamaha said that jet-skis are used for recreation or sport at many popular tourist beaches around the world, but were also used as rescue vehicles in many such beaches, such as in Hawaii, Japan and on the Gold Coast in Australia.

The vehicles may be a hard sell in Phuket, however, because the provincial governor in 2004 issued a ban on any new jet-ski registrations with the goal of phasing them out completely by 2011.

That plan took a major setback in February 2007, when then-Governor Niran Kalayanamit relaxed the restriction to allow owners of 219 jet-skis to transfer existing registrations to new boats.

Despite the jet-skis’ potential usefulness as life-saving equipment, public sentiment has remained overwhelmingly opposed to the Phuket jet-ski rental industry.

In the Gazette on-line poll conducted in August last year, 53.8% of readers called for a total ban on jet-skis with immediate effect, while 19.4% called for a gradual phase out.

Some 18.6% called for stricter enforcement of existing regulations, while just 1.3% called for more jet-skis and less regulation.

The poll was launched after the jet-ski rental industry made international headlines when footage of jet-ski operator Winai ‘JJ’ Naiman threatening UK servicemen as part of the infamous ‘jet-ski scam’ was broadcast in the UK documentary Big Trouble in Tourist Thailand.

The incident, and many like it, resulted in a mandatory insurance scheme on rental jet-skis in Phuket.

Despite the landmark scheme, the first of its kind anywhere in the world, there are still reports of jet-skis being brought in from other provinces to work in the rental industry without insurance.