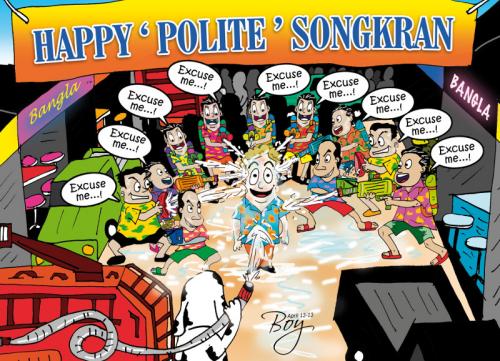 PHUKET: As this edition arrives at newsstands across the island, readers can judge for themselves whether the Royal Thai Police are adequately enforcing the controversial nationwide ban on using pickups and other conveyances to fuel roadside water fights over the Songkran holidays.

We sincerely hope that the ban will have a significant impact on the number of deaths and injuries related to the annual revelry, but fear that a lack of enforcement by authorities will prove otherwise.

Songkran, the traditional Thai “new year”, is far and away the most important holiday on the Thai calendar. Like Christmas and New Year in many Western countries, it is meant to be a time of family reunion, feasting and fun – with important religious aspects for many people. Unfortunately, too much emphasis on the word “fun” in recent decades has caused not only a deterioration in the important spiritual aspects of Songkran, but also resulted in the needless loss of far too many lives.

The sad fact is that across a large swath of our society, Songkran “celebrations” have descended into little more than mindless, alcohol-fueled water fights that are typically conducted in the worst of all locations: our already dangerous public roads. This wildly careless, not to mention illegal, behavior not only makes a mockery of our road laws, but also highlights our authorities’ lack of ability or desire to enforce them.

Images of Songkran revelry in places such as Bangkok’s Khaosarn Road that are disseminated around the globe in the international media also help to reinforce Thailand’s well-entrenched reputation as a frolicsome, free-for-all tourist destination, where silly behavior is not only acceptable, but tacitly encouraged.

Indeed, many foreign visitors who come here on vacation can be seen engaging in dangerous, wanton acts they would not dream of committing at home, whether it be riding a motorbike without a helmet, drunk driving or this week’s special: throwing slugs of water at fellow motorists, whether they have agreed to be doused or not.

We view the pursuit of happiness as an inalienable right. What is not and can never be a right, however, is endangering the safety and well-being of fellow members of society while engaged in this pursuit.

Efforts by authorities to minimize the death toll over the Songkran and Western New Year periods through their Seven Days of Danger road-safety campaigns may have a minor impact on the carnage, but the actual figures remain unacceptably high, with well over 1,000 deaths nationwide and many thousands more injured during Songkran over the past four years.

We hope the ban on using pickups to conduct water fights on our roads and any other measures to preserve human safety will be enforced by police, as this is the perfect starting point to returning some sanity to Songkran revelry.

Phuket Opinion: Seeing through the muck