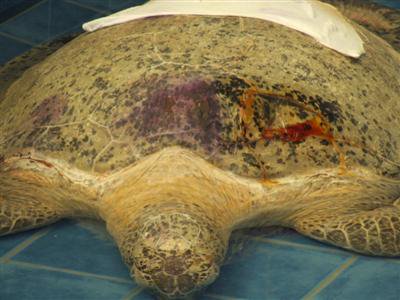 Researcher Kanjana Adulyanukosol, who heads the PMBC Endangered Species Unit, said her team will work with researchers from Kasetsart University’s Faculty of Veterinary Science to extract semen from male sea turtles and store it to fertilize females at a later date.

The first attempt at the extraction process, scheduled to take place from May 4 to 6, will start with Olive Ridley and Green sea turtles.

The first step in the delicate process is also the most difficult: extracting healthy semen from males and freezing in a special chemical solution so that it can be be implanted in an adult female.

“This is the hardest part, and Thailand lacks specialist knowledge of the procedure because this is the first experiment of its kind anywhere in the country,” said Dr Kanjana.

Sea turtle populations in Thai waters continue to decrease rapidly, with many species on the verge of extinction locally, she said.

Sea turtles need clean sand to nest, but most of their traditional nesting sites on the island have been compromised by hotel and real estate developments and other aspects of the tourism boom, she said.

Another factor that might be contributing to declining numbers is rising sea temperatures.

In recent years the PMBC has found clutches of failed sea turtle eggs, called khai lom (“wind eggs”) in Thai, at a nesting site at Tai Muang Beach in Phang Nga, she explained.

Dr Kanjana thinks changing sea temperatures might be adversely affecting populations, as the gender of sea turtles is dependent upon temperatures at nesting sites.

An increase in sea temperatures could cause an imbalance in male-to-female ratios, with fewer adult males than needed to mate with females.

The issue requires further study, but it could pose yet another obstacle to reproduction among the dwindling populations, she said.

Meanwhile, the Green Sea Turtle whose shell was damaged by fishermen and sent to the PMBC for treatment on April 20 is recovering well. The PMBC plans to release the turtle in mid-May near Racha Island, the same spot where it was caught by fishermen.