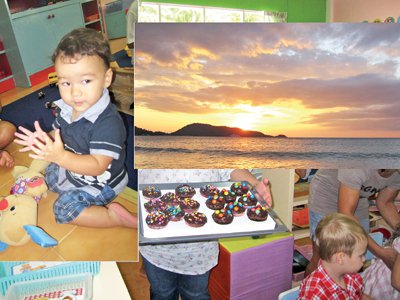 PHUKET: Continuing my series where I try to answer the computer questions I hear most frequently here in Phuket, this week I’ll tackle a question I hear over and over again around Christmas and New Year: “How do I recover photos or video I’ve deleted?”

People tend to take a lot of pictures around the end of the year, and all too frequently they delete pictures on the camera or video recorder that they really want to keep. Sometimes the photos go poof because the owner’s working with a new camera. Sometimes inexperienced people – little people, in particular – start messing around with things. Sometimes (and I’ll raise my hand here) your thumb is just bigger than the little buttons, and a simple slipped push knocks out a great photo.

Whatever your excuse… er, reason… if you’ve deleted one or more photos or videos on a camera, all is not lost. I’ve written in this column before about “undeleting” pictures from a camera – bringing back deleted pictures when you’re sure they’re gone forever. Invariably I get dozens of responses from relieved folks who manage to bring back memories that seemed irretrievably lost.

First things first: if you’ve accidentally deleted pictures on a camera, DON’T USE THE CAMERA. Don’t turn it on. Don’t plug it into your computer. If the memory card is already out of the camera, don’t put it back in the camera. In short: chill. Read the rest of this column before you try anything.

Of all the Windows tricks I’ve encountered over the years, this one has saved so many people, so many times, that you should seriously consider cutting out this column and stuffing it in your camera bag.

If you accidentally delete pictures on a digital camera, Windows can help you get them back. The method isn’t entirely foolproof but if you just deleted the shots of little Billy taking his first steps, and you didn’t keep a backup, there is hope. Best of all, there’s a photo undelete utility that works almost all the time and it doesn’t cost a satang.

Cameras don’t have fancy file systems. They use plain, old, simple FAT – the File Allocation Table approach pioneered in the original version of DOS, about a hundred years ago. (Bill Gates wrote much of the original code for FAT.) Camera FAT works with memory cards much like DOS FAT worked with floppy disks and, later, those gigantic 2 MB hard drives.

While FAT has few redeeming social values, one of its great virtues lies in the way that it deletes files. Er. Um. Actually, in the way it doesn’t delete files. Cameras (via FAT) divvy up their memory card space into fixed-size chunks. When you take a picture, the camera grabs enough unused chunks of the memory card to hold the picture, transfers the picture from the camera’s computer to the card, and marks the chunks of memory as being “in use”. Easy.

When you tell your camera to delete a picture, it doesn’t really delete anything. It just changes the first character of the file name to a reserved character that signifies, in effect, “the next time you need a chunk of memory, you can use all of the chunks that used to belong to this picture.” The camera continues to use all of the memory on your memory card. When it runs out of room, it goes back and looks for chunks that have been marked as being available for re-use.

That’s why you don’t want to do anything to your camera or its memory card until you’re ready to retrieve the “deleted” pictures – the ones that haven’t really been deleted at all. If you mess around with mother nature, you may over-write parts of good (but “deleted”) pictures with new pictures. You can see the effect of over-writing part of one picture with another in the photo above.

File undelete programs take advantage of the fact that the data – your picture – isn’t actually deleted until the camera needs to re-use the space on the memory card. With a bit of luck, you can recover pictures that you took a long, long time ago.
Here’s how to get the pictures back:

2. Download Recuva (pronounced “recover” www.piriform.com/recuva). In Windows XP, double-click on the downloaded file to install the program. In Vista, Windows 7 and Windows 8 (yes, it runs in the Windows 8 test versions), you may need to right-click the file and choose Run as Administrator. The installer takes a while, so be patient.

4. Click Start, All Programs (in XP, it’s just Programs), Recuva, then Recuva again. You get the Recuva Wizard. Click Next.

5. Follow the steps in the Wizard to choose the kind of files you want to recover (in this case, pictures), and point to the media card. On the final Wizard screen, check the box marked Enable Deep Scan, and click Start.

6. It may take a while, but in the end Recuva presents you with a list of recoverable files. Most of them show thumbnails of the picture that’s available. Check the boxes next to the files you want to recover, and click the Recover button.

Recuva itself is free. Piriform, the company that makes Recuva, wants to sell you a fully supported version for $24.95. If you appreciate what they’re doing – or if you have a technical question – show your thanks and pay for the product. It’s worth every penny.

With Woody hunkered down writing a book, the weekly Computer Clinics are taking a new turn. Until Woody emerges with an 860-page copy of “Windows 8 All-In-One For Dummies” under his arm, around May or June, Seth Bareiss will hold computer sessions on every-other Wednesday afternoon, from 1 to 3pm. If you have a Windows problem that needs to be solved, drop by one of Seth’s free afternoon sessions at the Sandwich Shoppes. Details in the Events Calendar. Sponsored by the Phuket Gazette and Khun Woody’s Sandwich Shoppes.