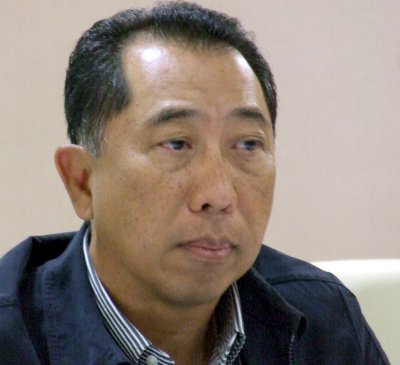 PHUKET: Phuket Police have arrested another suspect in connection with the assault of Sri panwa resort general manager Vorasit ‘Pla-wan’ Issara and an arrest warrant has been issued for an eighth suspect in the case.

Phuket Provincial Police Commander Chonasit Wattanavrangku yesterday updated the media about progress in the investigation, which must be concluded and forwarded to the court within 30 days.

He identified the seventh suspect as 27-year-old Komsan Ngamwilai, who has been charged with assault. Police are now seeking the eighth suspect, also a member of staff at the Rachada pub.

The other six suspects are being held at Phuket Provincial Court awaiting formal charges.

Forensic evidence and eyewitness accounts would be carefully analyzed to determine what charges would be filed against each of the suspects, Maj Gen Chonasit said.

“We will prepare the case as carefully as possible, in the limited time available under the law, to be fair to both sides,” he said.

Mr Vorasit’s social standing would not have any bearing on the police work, he said.

[For a Thai-language YouTube video of Mr Songkran’s comments about the case made at Bangkok Hospital on Saturday, click here.]

Described as “hi-so” (“high society”) in the Thai media, Mr Vorasit’s friends include Thai and foreign celebrities. Hollywood actor Jeremy Renner, who was with him on the night of the attack, escaped with only minor injuries.

The high-profile investigation will be conducted by a Phuket Provincial Police Deputy Commander, the island’s top-ranking investigator.

He would review the case file personally before forwarding it to the court, Maj Gen Chonasit said.

Rachada pub has been ordered closed for 90 days and the owner has been fined 5,000 baht for trading past the government-mandated closing time on the night of the incident, which took place at about 4:30am.

The latest any nightlife venue can legally operate on the island is 2am.

The fallout from the attack will have an effect on nightlife venues across the island.

“After the fight at Rachada pub I issued official letters to the the superintendents of all eight police stations in Phuket, including Phuket City, Patong and Chalong, ordering them to strictly enforce closing times at nightlife venues in their areas of jurisdiction,” he said.

The closing-time crackdown would have been issued even if the Rachada pub stabbing had not taken place, he stressed.

A new provincial police inspection unit will be making surprise inspections across the island to ensure compliance with the order.

The officers will also search for weapons, make sure there are no guests under 20 years of age on the premises, and that all staff are at least 18 years of age, he said.