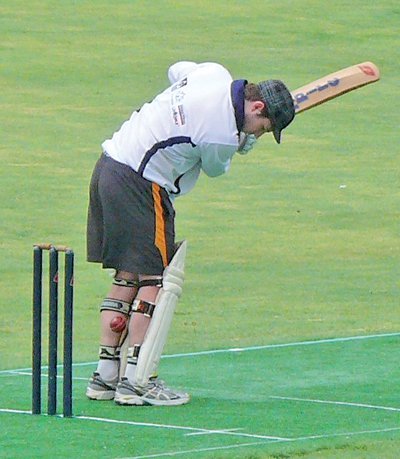 The ground was basking in sunshine with the pitch and outfield fast, so expectations were high of some big scores.

The Phuket Leopards went into bat first and the Thanyapura Tigers made an unusual and bold move by opening the bowling with leg spinner Dan Ogunshakin. However, the youngsters showed no signs of being intimidated by their older opponents, with TP Suttiprapha (28) and PM Suriya (17) putting on an opening partnership of 50 runs before Suriya was dismissed off the bowling of Roshan Jayasurya.

W.J. Legngoo (33), with his baseball style batting stance, and SK Jutamart (20) then put on another 68 run partnership until a mix-up saw Jutamart run out from some sharp fielding by Ryan Dunn.

P.A. Mathong (29) was particularly impressive with his batting technique, working the ball around the ground for ones and twos and dispatching loose balls to the boundary.

After the lunch break, the Tigers entered the fray. David Roberts (6) was dismissed early, being bowled by A.B. Kaewliporn with the score on 20. Fellow opener Joseph Nagy (15) was run out by S.K. Wongwai shortly thereafter.

Apart from contributions by Burger Marx (12) and Dane Halpin (15), the rest of the top order failed to trouble the scorers, and with 5 wickets down for 59 runs, the Tigers looked like they might fizzle out of the match.

However, Ryan Dunn then put some spark back into the Tigers with an unbeaten 80 not out (including 12 fours and 1 six), single-handedly winning the match for the Tigers who reached their target of 196 runs with 7 wickets down from 28.3 overs.

Pick of the bowlers for the Leopards was T.P. Suttiprapha with 3 wickets for 38 runs while the others proved to be expensive.

Man of the match was Ryan Dunn of the Thanyapura Tigers.