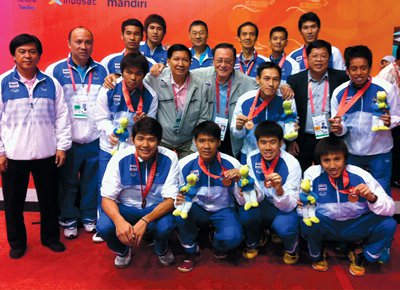 Nitchaon Jindapol earned a gold medal with the Thailand women’s badminton team, who made hosts Indonesia settle for silver in the final bout.

Maneepong, with doubles partner Isara Bodin, advanced from the round of 16 after defeating Cambodia’s Chin Depthputhichea and Vann Chanpisey, before losing in the quarter finals to Indonesia’s Kido Markis and Setiawan Hendra.

Also winning a gold medal for Phuket was Tantipong Phetchaiya in the Hammer Throw competition. Tantipong set a new SEA Games record with his throw of 61.46 meters.

The games began earlier this month and concluded on Tuesday following two weeks of spirited sports competition held among 11 nations.

This year’s hosts were triumphant in tallying up the most medals, with a total of 476 medals in all. Thailand came in second this time with 329, followed by Vietnam (288), Malaysia (190) and Singapore (160).

While Thailand’s men’s football team failed to make the finals, in which defending champs Malaysia kept their title, Thailand’s men and women dominated volleyball, futsal and 3-a-side Sepak Takraw, among others.

Thailand’s main medal source came from success in athletics with 14 golds, followed by nine golds in weightlifting, eight in swimming, and seven each in taekwondo and boxing.

Judo and canoeing both returned five golds, with four coming from sailing.