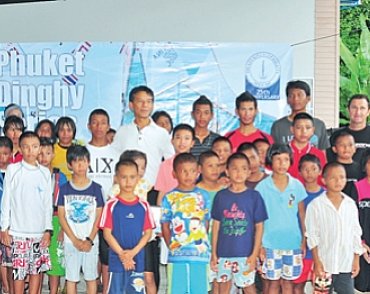 PHUKET: Following on from two previous Phuket Dinghy Series race events, twenty-six Optimists and five Lasers competed in the series decider held on November 19 and 20.
Overall positions in the event were all to sail for, given that plenty of points were available from the six races that were scheduled over the two days.

This was a welcome feature of the series which provided a unique opportunity for inexperienced sailors to learn more about competitive sailing and to further develop their sailing skills.

A light onshore breeze welcomed competitors on day one of Series III, but more testing conditions awaited the sailors where the course was set offshore.

Current series leader and 2010 champ Anapat Ngarmdee from Sattahip knew that Akapoj Kankaew representing the Phuket Youth Sailing Club was breathing down his neck and that any mistake would cost him a second title.

Anapat broke from a congested starting line and held the lead until the end. A second win followed, but Akapoj kept his rival within reach with two seconds.

In the last race of the day, Akapoj took the line in first, closing the gap on Anapat who finished fifth to set up an enthralling day two.

Anapat’s slip in the last race of day one seemed to be a motivator and he stepped up a gear, taking first in all three races on day two and the Series III title. Akapoj posted a third and two seconds to finish second overall with Terrapong Tokratoak in third.

Close racing in the Laser Class saw places swapped throughout the weekend with Jittawat Boonrat finally coming out on top, posting four wins out of six to take the Series III title. Inconsistency let young Chut Dawruang down but after a tough battle Chut took second in Series III from Marco Garambois in third.

Winners of Series III were presented with trophies by Vice Admiral Taratorn Kajitsuwan, Commander Third Naval Area Command. The overall series winners will receive their trophies at the Royal Awards of the Phuket King’s Cup Regatta on December 10 at Kata Beach Resort & Spa.

The Phuket Dinghy Series was established by the Phuket King’s Cup Regatta in 2010 to promote and encourage sailing in Thailand by involving young people in the sport. The 2011 Series took place over three weekends in successive months (September 17-18, October 15-16 and November 19-20) and was supported by the Yacht Racing Association of Thailand, the Royal Thai Navy and the Province of Phuket.

Phuket ‘brand’ up for discussion at Wednesday’s AMCHAM meet