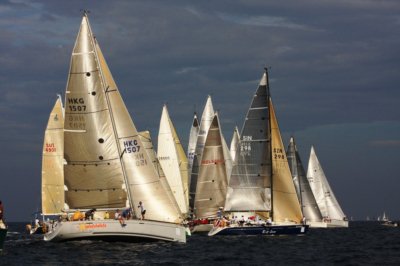 PHUKET: Neil Pryde could be on course for another victory in the Racing Division after exchanging first places with Full Metal Jacket on day three of the 2009 King’s Cup Regatta.

Hi-Fi finished the first race of the day in pole position while Full Metal Jacket with America’s Cup helmsman Chris Dickson in charge had to settle for second.

Roles were reversed in the day’s second race with Full Metal Jacket finishing first and Hi Fi second, although the latter still has a commanding five point lead in the series.

The Firefly 850 class is the only class consisting of identical designs of boats, meaning that the first boat over the line is automatically the winner. This makes for some exciting racing, and today was no exception, with Brent Gribble’s Twin Sharks winning the first race by a margin of less than two minutes and Damian Ford’s SEA Properties winning the second by less than a minute.

“We are showing signs of improvement but I think Twin Sharks has got is sewn up now. Conditions were good and it was an exciting day’s racing. I am happy to have won a race,” said Damian Ford.

Fegus Wilmer and Henry Kaye recorded their fifth and sixth straight victories on Thor in the Multihull Class as did Matt Allen on Ichi Ban in IRC 1. Elsewhere, the IRC 2 class is looking set to go to the wire, with Royal Thai Navy skippered by Wiwat Poonpat recording back to back victories to move within two points of Peter Dyer’s Team Bentley.