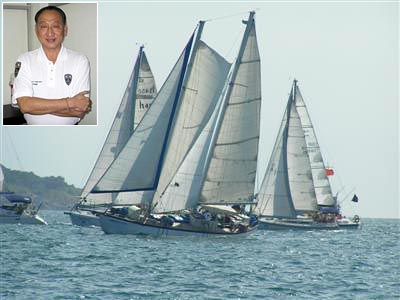 PHUKET CITY: Rumors of an imminent crackdown on foreign sailors taking part in the King’s Cup Regatta over work permit violations are untrue, the head of Phuket Immigration has confirmed.

A thread on the popular Thai Visa web forum yesterday started with the post:

“I guarantee that such arrests won’t happen,” he said.

“The Phuket Immigration Office helps promote Phuket tourism and works to ensure convenience to all participants in this event,” he said.

He encouraged anyone who has a problem in this regard to contact him directly on his mobile at 081-894 7194.

So it will be smooth sailing for any and all taking part.

The Phuket Gazette is a proud sponsor of the annual King’s Cup regattas.

Today’s forecast for Phuket by the Meteorological Department calls for partly cloudy skies with widely scattered thundershowers over 30 percent of the area in the evening.

Winds will be northeasterly at 8-19 knots (15-35km/h) and wave height will be about one meter inshore and up to two meters offshore, making for fine sailing conditions.