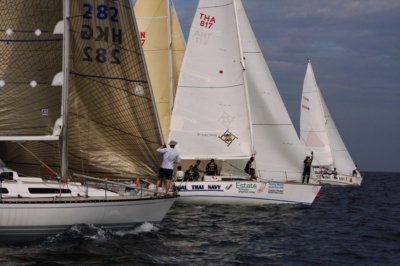 PHUKET: While the outcome in many of the classes remains a foregone conclusion, the IRC 2 class is wide open going into the final day of the 2009 King’s Cup after Thai Navy 1, skippered by CPO. 3 Wiwat Poonpat, won the only race of day four to cut Team Bentley’s lead in the series to a single point.

Team Bentley, skippered by Peter Dyer, finished in second place – but only just – finishing three seconds ahead of Waka Teare and four seconds ahead of Phoenix, once the times had been adjusted.

CPO. 3 Wiwat Poonpat is confident that he will be able to defend his lead and win the King’s Cup for a second consecutive year.

“The wind today was good and the team worked very well together. We have a heavy boat, which gives us an advantage in windy conditions. If the wind is good tomorrow, I think we will be able to win the series,” he said.

Thai Navy 2 did not fare quite so well in the rough conditions; a broken mast effectively ending the boat’s participation in this year’s regatta.

Only three Firefly 850s finished race 6 with Brent Gribble’s Twin Sharks winning the race to give it a one point lead over Hans Rahman’s Voodoo Child.

Turtles released in Phuket for HM The King