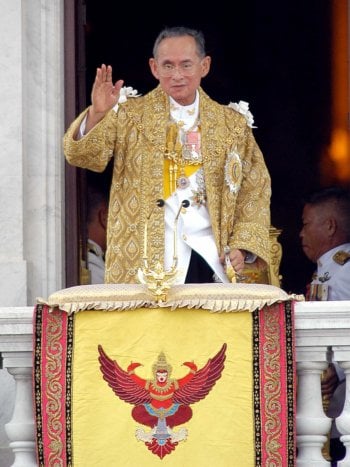 On the occasion of his birthday, His Majesty will grant an audience to his well-wishers at the Amarin Winitchai Throne Hall inside the Grand Palace this morning.

His Majesty will reach the Amarin Winit-chai Throne Hall at around 10.30am.

On behalf of the Royal Family, the Crown Prince will then officially wish His Majesty a happy birthday.

Prime Minister Abhisit Vejjajiva and Parliament President Chai Chidchob will also convey best wishes to the King on the occasion of his birthday.

His Majesty will also give an address.

Channel 5 will televise the event.

Millions of Thais will stay glued to their TVs to watch the royal audience, and a large number of the King’s loyal subjects camped out at Siriraj Hospital last night to ensure that they can chant “Long Live the King” in His Majesty’s presence.

According to a recent survey, Thais’ happiness has increased because of the King’s birthday celebrations.

Tonight, millions of Thais across the country will light candles and sing royal anthems in honour of His Majesty.

A procession is scheduled to start at 2:30pm from the Sea Pearl Intersection to Loma Park on Patong Beach, where Patong municipality officials will pay their respects to an image of His Majesty The King.

As December 5 is also marked as Fathers’ Day in Thailand, Patong Mayor Pian Keesin will hand out ‘Best Father’ awards and prizes for paintings, poems and writing celebrating Fathers’ Day.

Phuket Governor Wichai Phraisa-ngop is scheduled at 4pm to join officials and the public in paying respects to the King and singing the National Anthem.

A football match will then be held in honor of His Majesty.

Seedlings planted in Phuket Town for HM The King