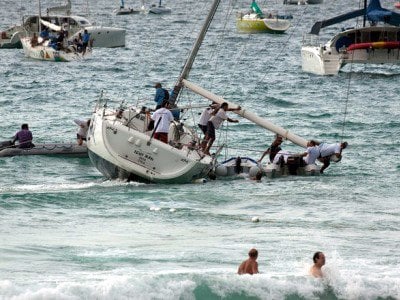 IRC 1 class winner Matt Allen on Ichi Ban lifted his third consecutive class trophy without even racing. They had won the class with an impressive 1-2-1-3-1-1-3 scorecard by sundown yesterday.

No racers in the King’s Cup have won three consecutive class trophies since Bill Gasson won the keelboat class in 1989, 1990 and 1991.

However, Ichi Ban dragged her anchor in some strong swell and grounded close to shore.

After a little manual labor, the yacht was floating freely again, apparently without sustaining damage.

Back on the course, Peter Wintle’s Koull Baby raced well to finish second overall in the class, ahead of Ben Copley’s Phuket-based Katsu in third place.

In ICR 2, however, it was a different story. CPO Wiwat Poonpat’s Royal Thai Navy 1 (RTN 1) started the day at the top of the series leader board, one point ahead of Peter Dyer’s Team Sea Bees.

Dyer won the first race, while RTN 1 placed eighth. The win gave Team Sea Bees a one-point lead in the series – with one race to go.

Keen to score their own King’s Cup “hat trick”, RTN 1 fought back and won their second race of the day, their last race of the regatta.

The rest was down to Team Sea Bees, and they did not disappoint.

Team Sea Bees came in third, high enough in the standings to win the class by two points and bestow Dyer an overall class victory in his seventh King’s Cup.

The Multihull class was also a fight to the finish, with David Liddell’s Miss Saigon taking top honors in the class with 16 points.

Despite winning their first of two races today and placing third in their other, Fergus Wilmer and Henry Kaye, who has raced in every King’s Cup, finished second overall on Thor just one point behind.

Any Pape and his Phuket-based Da Vinci placed third on 17 points, one point behind Thor.

Tonight the sailors are letting their hair luff at the brand-new Centara Grand Beach Resort at Karon, which is hosting its first King’s Cup Regatta party.

Tomorrow morning the regatta fleet will perform the traditional sail-past tribute in honor of the 83rd birthday of HM Bhumibol Adulyadej, the Royal Patron of the King’s Cup Regatta.

The awards presentation ceremony, to be presided over by HM The King’s Personal Representative ML Usni Pramoj, will start at 5:45pm in the Grand Ballroom at the Kata Beach Resort.

Often colloquially referred to as the “home” of the King’s Cup, the resort will host the closing party for the regatta.

For full provisional results for all classes in the regatta, click here.