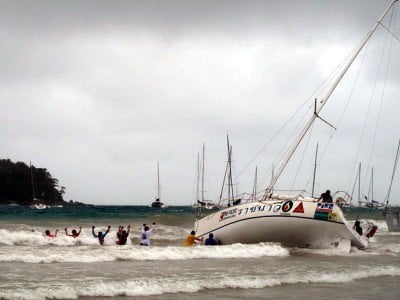 PHUKET: Racers in the Phuket King’s Cup Regatta are working furiously this morning to recover several yachts pushed ashore by strong winds and swell during the night.

The last race of the regatta was canceled as organizers stared at four boats beached at Kata Beach and seven boats caught in the surf break.

Many boats have already left the bay heading for shelter in Ao Chalong. The mark boats are already there awaiting direction to return to provide ground tackle to any boats struggling to hold their anchors.

More than 30 sailors desperately tried to float Royal Thai Navy 1 out of the break.

On one side of the boat was 10 sailors pushing hard to keep the boat in the waves while on other side another 20-plus sailors were pulling their hardest on the main halyard to lean the boat over in an attempt to free the keel from the sand.

Making the salvage operation even more dangerous is the tide coming in and three boats on the beach break floating perilously close to each other.

Sailors from around the fleet have leapt to the assistance of their fellow yachties, assisting wherever possible. Drenched by salt water and rain, it is all hands on deck and ropes on the beach.

One boat with luck on their side was Henry Kaye’s Thor. The boat beached safely with no damage. With the help of 20 sailors, he plans to carry his 1,000-kilogram boat up the beach away from the top of the tide.

Once the sea abates tomorrow, he will then call on those sailors to carry Thor back down the beach to float if off and away from Kata Beach.