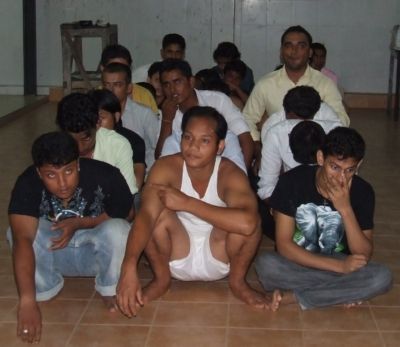 Phuket Immigration Police Superintendent Col Chanatpol Yongbunjerd said the arrests were part of an ongoing crackdown on alien workers violating the terms of their work visas by engaging in work, such as retail sales, that is restricted to Thai nationals.

The crackdown follows a campaign which aimed to see all alien workers become legally registered with the authorities.

“Now that the alien worker registration campaign has ended, we have to strictly examine all alien workers on the island, especially at entry points like piers and the Tah Chat Chai road checkpoint.

“We will check to make sure they are properly registered and that the work they actually do matches that specified in their work visas. We will make these checks continually from now on,” Col Chanatpol said.

Under the ‘work visa’ program, Thais may employ qualified nationals from Burma, Laos and Cambodia to work in six different categories of low-wage labor, such as fishing and rubber tapping.

In an effort to legalize thousands of its citizens working illegally in Thailand, the Burmese government in July opened ‘citizen identification centers‘ at three immigration checkpoints along the Thai border to issue ‘work passports’ for its nationals, who could then re-enter the country and work legally after having a 2,000-baht ‘work visa’ issued by the Thai authorities.

Arrested at vending stalls in Karon in a sweep that began at 7pm, the aliens – 30 males and 12 females – were taken to Phuket Immigration headquarters at Saphan Hin for further examination and processing.

“All of those arrested claimed to be Burmese, but we have to check to see if that is true or not. A document check revealed that some were actually Nepalese,” Col Chanatpol said.

“If they have the correct documents, we will let them go. However, any illegal aliens will be prosecuted, repatriated to their home countries and blacklisted so that they can never enter Thailand again,” he said.

The Immigration crackdown will now continue in other parts of Phuket, he said.

“I can not say what area we will target next, but officers have to arrest them nicely, without resorting to violence,” he added.

However, a crowd of some 30 employers and relatives who gathered in front of the detention area at Phuket Immigration complained that police had used violence in taking the suspects in.

“Some of them got kicked and punched. Even though we presented police with all the right documents to prove that they were legal, they still went ahead and arrested them,” one employer told the Gazette.

Some employers showed the media work passes issued by the Burmese regime together with passports and other documents in an effort to show that those arrested were working legally.

When the examination process concluded after midnight, Col Chanatpol told the Gazette that 32 of those arrested – 23 males and 9 females – were working in retail sales; not sewing, as was specified on their work permits.

Retail sales is a profession restricted to Thai nationals under the law, he said.

“There are definitely some in Phuket. We continually review lists of wanted criminals supplied by these agencies,” he said.