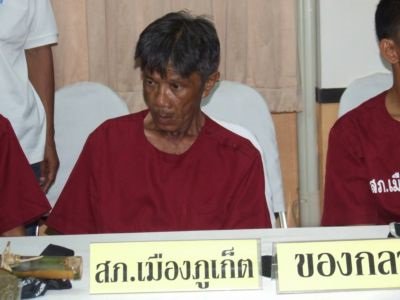 PHUKET CITY: An elderly drug dealer who was caught on his motorbike with a small package of marijuana in his pocket turned out to have a kilo of the drug stashed at his Phuket house.

Police manning the lights pulled Mr Tee over, finding the marijuana in his pocket.

Mr Tee told the arresting officers he had a much larger stash at his home nearby in Tarntong Village, Wichit.

At Mr Tee’s house, police found a kilogram of marijuana stashed in a backpack in his bedroom.

There was also a large knife and chopping board in the room.

Phuket Provincial Police Commander Pigad Thantipong held a press conference on Wednesday to announce the arrest, together with that of another man, 23-year-old Pongtorn Bunpet.

Mr Pongtorn was also caught with a kilo of marijuana at his house.

“With high season fast approaching, and the number of tourists set to increase over the next few months, the demand for marijuana is higher,” he said.

Maj Gen Pigad said his officers would be clamping down on marijuana pushers on the island.