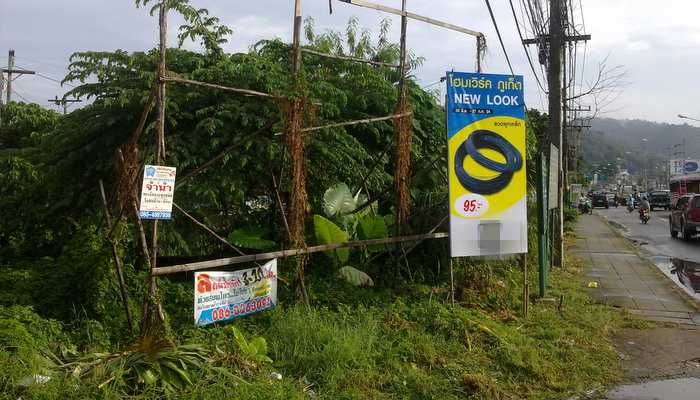 PHUKET: The growing number of unsightly roadside advertising signs illegally erected on government land will be pulled down, confirmed a Phuket official today.

The news flies in the face of reports that all billboards along Phuket’s roadsides will be pulled down.

“I have already discussed the problem of haphazardly erected signs beside Phuket’s roads with Governor Nisit Jansomwong,” Samak Luedwonghad, director of the Phuket Highways Office, told the Phuket Gazette today.

“Every sign that has been illegally placed on public land will be pulled down – but signs on private land with the proper permission will be allowed to stay.”

“Private billboards that have been set up on private land will be left alone, as local government takes care of regulating those.”

Government billboards on public land used to advertise important issues such as road safety would also be left standing, as they are there for the benefit of the community, said Mr Samak.

Most of the illegally-erected roadside hoarding that is on government land advertise new housing and other real-estate projects, he noted.

Mr Samak said the Highways Office was in a continuous battle to dismantle illegal billboards, with many of them being erected during weekends, when officers are off duty.

“Those people who put up illegal billboards know our weaknesses and often do it on a Friday evening – or during the night – because they know our office is closed and the earliest we can pull down the billboards is on the following Monday,” he said.

The Darasamuth and Samkong intersections are favored spots for illegal advertisers, as the billboards there would be viewed by a large number of motorists.

“The problem is everywhere – not just in Phuket – because the penalties for this offence are small. It is really spoiling our roadsides,” Mr Samak explained.

“Once Governor Nisit returns from China, we [Phuket Highways Office] will raise the issue with him again and ask him to introduce tighter rules.

“In the meantime, my staff will continue to remove these illegal billboards as fast as we can.”

Phuket man robbed of B1mn worth of amulets