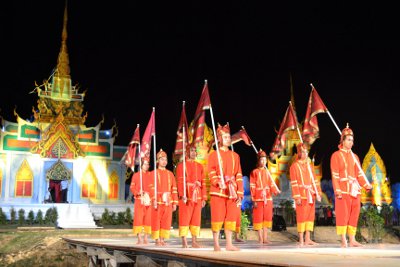 PHUKET: Those wanting to catch the re-enactment of the Battle of Thalang, from which the Phuket heroines “Jan” and “Mook” gained their fame, should clear their schedule from March 13 to 15.

The official program of events for the annual celebrations will start on Sunday, but the re-enactment of the historic battle at Thalang Victory Memorial Field doesn’t begin until March 13.

Phuket Governor Tri Augkaradacha announced that about 6 million baht was spent in preparation for the event.

Rajabhat University, Art and cultural office director Dr Sawit Pongwat explained, “In the time of King Buddha Yodfa Chulaloke (Rama I), on March 13, 1785, the two heroines fought wisely against the Burmese army and won. So the day is marked as Thalang’s victory day.”

For the re-enactment of the battle, 12 scenes will be set with 1,200 performers, he explained.

“The performers are from Rajabhat University, as well as students from Phuket and Phang Nga schools. Phuket Governor Tri Augkarasdacha will be an honorary performer and play the part of King Buddha Yodfa Chulaloke (Rama I),” Dr Sawit said.