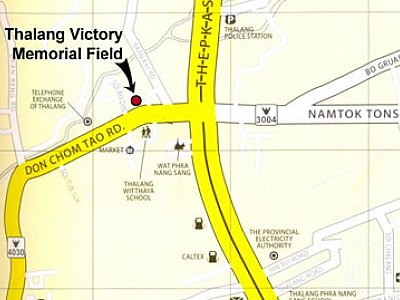 PHUKET: The Phuket Cultural Office has a fun-packed range of activities lined up for this year’s Heroines Memorial Fair, which started on Friday in Thalang.

Among the attractions taking place to honor Jan and Mook, the famous heroines who led Siamese forces in repelling an invasion by the Burmese in 1785, are group weddings, traditional dance performances and spectacular light and sound shows.

During the governor of Phuket’s regular “Meet the Media” event on Thursday, provincial culture chief Prayoon Noosuk said the Culture Office, Provincial Office and other local government organizations were once again putting on the fair to glorify the heroism of Lady Thepkrasattri and Lady Srisoonthorn, as Jan and Muk became known.

The event would also teach the younger generation about the heroism of their ancestors, who sacrificed their blood and lives for the sake of the generations to come, he said.

The fair is set to run until March 17. The group Buddhist ordinations taking place throughout will be at Wat Mongkhon Nimit in Phuket City.

On March 11, there will be sports competitions at Thalang Historical Park near the Heroines’ Monument.

On March 13, at the auspicious time of 9.09am, there will be a ceremony to honor Jan and Muk. Officials will place garlands at the Heroines’ Monument and praise the bravery of the two sisters.

From March 13 to 15, from 5pm around the monument, there will be stalls selling local foods and One Tambon One Product (OTOP) goods.

There will also be demonstrations of local culture, including Southern Thai shadow puppetry and manohra and rong ngeng folk dancing.

From 8.30pm there will also be the usual spectacular light and sound show about the history of Thalang.