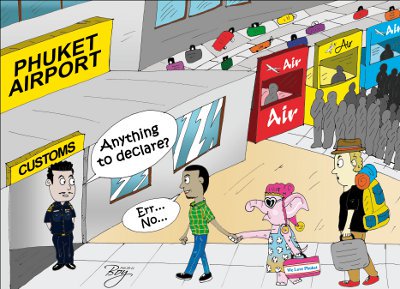 PHUKET: The United Nations estimates that the human population of the Earth quietly surpassed the seven billion mark last October. As a result, humankind is putting ever more pressure on the environment that sustains us. In the process, we are also driving many other animal species into extinction, some before they are even recognized by science.

Few places on the planet could serve as a better showcase for the demise of native wildlife than Thailand, with Phuket worthy of distinction in this regard.

Recent events involving the country’s national symbol, the elephant, have once again cast unwanted international attention on Thailand, reinforcing the country’s reputation as a low-end performer, if not a source of outright humor, when it comes to respect for wildlife.

The raid earlier this month on a sanctuary for abused wildlife run by the Wildlife Friends Foundation of Thailand (WFFT) in Phetchaburi is a good case in point.

The raid followed a letter to the media from WFFT founder Edwin Wiek in which he challenged authorities to do their jobs by checking DNA records of baby elephants at tourist-oriented elephant camps, to ensure that the animals were properly registered as domestic.

His actions have already resulted in two unregistered baby elephants in Phuket being slated for reunion with their mothers, but his exposure of the issue would appear to have triggered an unexpected backlash. His sanctuary was raided two weeks later by some 70 park rangers, including some in balaclavas, who removed many animals, including primates.

Although it may be a coincidence, the National Research Council of Thailand shortly thereafter announced its plan to establish the country’s first “National Primate Research Center (NPRC)”, a breeding facility in Saraburi costing 1.8 billion baht (approx US$ 60,000,000). But the research will have little to do with conservation.

The stated objective of the NPRC is to provide subjects for medical testing of products based on Thai traditional medicines that researchers would eventually like to sell to a wider market.

The notion and imagery of “wild elephant smuggling” would be rich in humor if it weren’t for the multi-layered corruption of politicians, government officials and “influential figures” who make it all possible – at a rate of up to 250 baby elephants a year, if we are to accept Mr Wiek’s estimates.

It would be hard to imagine a more difficult object to “smuggle” through a police or immigration checkpoint than a living, breathing pachyderm. Even a baby like Pang Saifon, born in Phuket’s Rawai sub-district on Tuesday, hit the ground weighing 75 kilograms.

As it is almost inconceivable that elephants could be smuggled onto the island through the Tah Chat Chai Police checkpoint, the only conclusion for many observers is that there would be officials who know, or would at least suspect, what is going on with the elephants working on Phuket. So why the apparent lack of enforcement of the regulations?

Phuket Opinion: Truth not optional in the media or in public relations