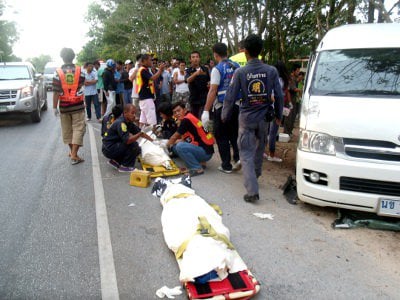 PHUKET: Four tourists are dead and five injured after a pickup truck loaded with fish and a van filled with tourists heading for Phuket collided in Tai Muang, Phang Nga, yesterday evening.

Tai Muang Police received a report of the accident, on the Mae Yey Bridge on Petchkasem Road between Tai Muang and Takuapa Moo 1 in Thung Maphrao, Tai Muang District, at 5:30pm

At the scene, officers found a white van registered in Trang province with the right side of the van heavily damaged from the driver’s door to the end of the van.

Emergency rescue first-responders from the Pu In Foundation as well as rescue workers from Khao Lak and Takuapa rushed to free the tourists trapped inside.

Four of the tourists were dead. Another five were injured, all of whom were rushed to Tai Muang Hospital for treatment.

About 100 meters down the road was a Phuket-registered pickup truck lying on its side with its cargo of fish strewn over the road.

Police identified the driver of the truck as Chamnan Dabgaew, a 26-year-old resident of Rassada subdistrict, in Phuket.

He did not flee the scene.

“The driver of the pickup was driving toward Takuapa. He lost control on the curve and crossed into the oncoming lane and hit the tourist van heading toward Phuket,” said Lt Col Songwut Khunjan of Tai Muang Police.

However, the driver of the tourist van did flee the scene, said police.

“We have yet to confirm his identify. We are now looking for the driver in order to question him and determine the true cause of the accident,” said Lt Col Songwut.