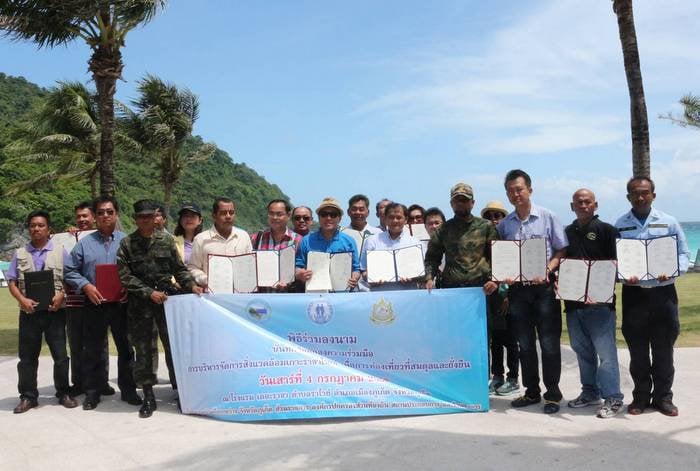 PHUKET: Phuket officials moved to ensure the environmental sustainability and the growth of the tourism industry on Racha Island with the signing of a Memorandum of Understanding (MoU) with local hotels and restaurants on Saturday.

Governor Nisit Jansomwong signed the MoU on proper trash and wastewater disposal during his visit to the island, while also underscoring that all segments, including the official arms, have to unite in preventing environmental degradation.

As agreed upon in the MoU, all boats and businesses on Koh Racha Yai are now forbidden from dumping trash in the sea. Trash has to be effectively sorted out according to type before being brought to Rawai to be properly disposed of.

The management of wastewater was front and center as part of the MoU following a resolution by the Cabinet.

“Our move to resolve wastewater problems on Koh Racha follows a Cabinet resolution that demanded a quick solution. We have appointed officials to work on this issue in a sustainable way in order to maintain the beauty of Koh Racha,” said Governor Nisit.

“I want everyone to join in solving this problem, rather than it merely being a law enforcement issue. I believe that environmental issues cannot be solved by issuing laws alone, because it depends on people’s love for nature.”

The guidelines agreed to be adhered to by those who signed the MoU included having pumps placed in canals as an immediate solution to the rank water building up. There will also be a survey of the sewage system and all restaurants will have grease traps installed.

Additionally, the Natural Resources and Environment Phuket Office was ordered to advise entrepreneurs on wastewater management to ensure the problem doesn’t continue.