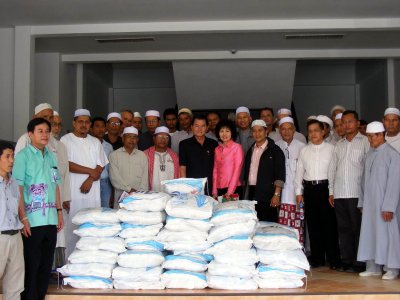 PHUKET: The Phuket Governor and his wife today presided over a ceremony to distribute sugar to local Muslims who are now fasting during the holy month of Ramadan.

The ceremony, held at Phuket Provincial Hall at 3pm, saw Phuket Governor Wichai Phraisa-ngop and his wife Thaisika distribute 51 large sacks of sugar, one for each of the 51 mosques on the island.

Noting the importance of fasting to the Muslim community, Gov Wichai said he would try and pay a visit to a different mosque every night during Ramadan, which runs until September 9.