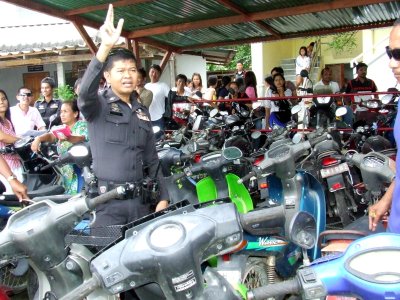 PHUKET: Chalong Police this week took the opportunity to clear out their car park with a public auction of motorbikes seized as evidence in drug-related cases.

It was short work, with all 18 motorbikes sold in an hour on Wednesday.

The proceeds, a total of 100,100 baht, will be handed over to the Ministry of Finance, said Snr Sgt Maj Chalerm Tantapan.

The lowest starting bid was 500 baht for a motorbike that sold for 1,500 baht.

Considered among the best buys of the day was a Honda Click in very good condition that sold for 17,000 baht, from a starting bid of 3,500 baht.

About 30 people joined the auction, the first held by Chalong Police in about three years.

“There will be another auction around the end of this year. That one will will have cars and motorbikes up for auction,” said Chalerm.

“Anyone can join the auction, except people directly involved in organizing it,” he added.