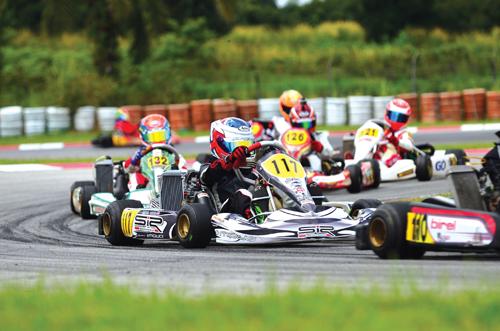 PHUKET: After completing their rookie karting season at the national level in 2012, Phuket’s Ben and Sam Grimes took a well-earned rest for a couple of months over the New Year and reviewed their options and priorities for 2013.

For Ben, it was about improving on his 3rd place finish in last year’s Thai National Championship and consistently competing at the front end of the grid, and to challenge for this year’s Championship.

For Sam, who has made the move up from the 60cc Cadet Class to the 125cc Junior Class, where he will compete directly against his elder brother, it is really about gaining experience in the ultra-competitive junior category and seeking continual improvements in speed, lap times, race craft and results.

Over the close season, a decision was made that the boys would compete in the Rotax Asia Max Challenge (AMC) series held in Malaysia, in addition to the Thai Championships.

Rotax AMC is without a doubt the most competitive series in South Asia, drawing some of the best drivers from across Asia, in addition to having strong Thai representation.

The year also started brightly when the two brothers were able to secure a sponsorship arrangement with the investment management firm Secure Wealth Management, who are based in Phuket, as well as having sales offices overseas.

A busy year of racing commenced at Sepang in March with Round 1 of the AMC. Both boys were keen to impress early. Sam, was however to have a very tough weekend trying to get to grips with the larger, more powerful kart; although he showed reasonable pace in the practice sessions, he was to qualify 24th in the 32 kart field and suffered a series of minor accidents resulting in him finishing only one of the four scheduled races.

Ben had a superb weekend. The team set him a target of finishing close to a top 10 position, so it was a little disappointing when he qualified in 19th place, although – and to put the competitiveness of the event into perspective – he was only three tenths of a second off 7th place.

In both heats 1 and 2, storming starts lifted Ben up the field to finish 11th and 10th respectively, which placed him overall in 9th place on the grid for the pre-final, where he drove a mature and sensible race to finish 8th. Starting from the 4th row in the final, Ben again drove sensibly and showed excellent race craft to eventually pick up three more places and grab the final place on the podium to finish a highly creditable 5th on his AMC debut.

Round 1 of the Thai Rotax Championship followed and both brothers suffered frustrating weekends, mainly as a result of equipment issues. Things did not start overly well when their new chassis did not make it on time, resulting in the need to use different karts. Throughout the weekend, the team struggled to get the new engines up to speed and both karts suffered jetting problems resulting in Ben finishing 5th and Sam 7th from a field of 10.

The first weekend in April brought another visit to Sepang in Kuala Lumpur for AMC Round 2, with hopes high for another successful weekend. Even more drivers entered Round 2, so in total 35 karts took to the track in what turned out to be a massively competitive and very aggressive weekend of races and incidents.

Ben was again a little disappointed to qualify in 15th position while Sam started to feel more comfortable at the busy home of Malaysia motor racing and qualified a creditable 25th, beating several more experienced racers on only his 2nd time at the track in a junior kart.

The racing, however, started disastrously for Ben when he was involved in crashes in both heats with him finishing well down the field in 26th place in heat 1 and being black flagged for losing his nose cone in heat 2. This put him almost last in 30th position on the grid for the pre-final but a dogged and aggressive drive saw him overtake 17 drivers to finish 13th and set his personal best lap at Sepang, only two tenths of a second off the fastest lap of the day.

Ben had another racing incident at the start of the final when another driver pushed him off the track and onto the grass on the infield, which negated most of the good work he had achieved in the pre-final. Coming out of the first corner in 22nd position, it was an uphill battle for him to regain the places he had lost, but that he did and eventually he finished a strong 12th to add valuable championship points to those gained in Round 1.

After two rounds, Ben currently stands 5th in the AMC standings, which has given him an excellent foundation for the season.

Sam had a much better weekend than in the first round. He qualified a very creditable 24th and finished the two heats in 17th and 22nd respectively. Starting the pre-final 8 places ahead of his brother Ben in 22nd, Sam maintained his place to finish in the same position, although he slipped a little in a very tight final to finish 27th. He continually improved his personal best lap time and finally broke into the 49s, thereby being less than seven tenths of a second off pole position but admitted at the end, that he had possibly sacrificed final race position for the comfort of actually finishing the race.

The Thai Championship continues at Saraburi on April 27 and 28 and the third round of the Malaysia AMC will be held at the Elite Speedway in Kuala Lumpur from May 17 to 19.

Phuket Sports: Day 2 results of the ITF at TSLC