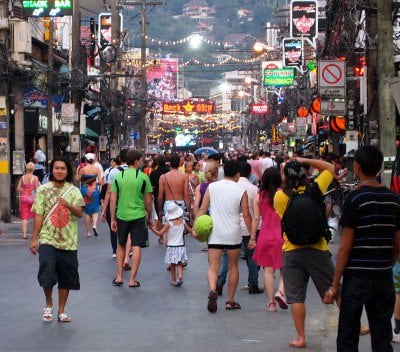 “Many government departments in Phuket ask for protection money from entertainment operators in Patong, and the problem is getting worse,” said Mr Chairat.

“We would like to ask the Governor to please investigate these government departments,” Mr Chairat added.

Mr Weerawit told the Gazette that officials from up to nearly 20 government departments and law enforcement agencies regularly ask night venues in Patong for money.

“To the best of my knowledge every single bar in Patong has to pay at least 500 baht to some government official each month,” he said.

“Large nightlife venues in Patong pay much, much more. Some pay as much as 100,000 baht a month,” he added.

However, he added, “The problem is getting so bad that some nightclubs have even changed their businesses to restaurants to try to avoid the corruption.”

During the meeting, Mr Weerawit also requested that Governor Maitri extend the trading hours for night entertainment venues so they could serve the many tourists who come to Phuket to party.

“Tourists love to stay out late. After night entertainment venues close at the regulated hours, the tourists buy drinks at convenience stores and hang out on the beach.

“This is makes our beaches dirty and jeopardizes tourists’ safety,” he added.

Governor Maitri said he would personally visit Patong to follow up on the issue.

“Thank you for the information. I will have the relevant departments investigate the matter and I will keep track of any progress made,” Governor Maitri said.